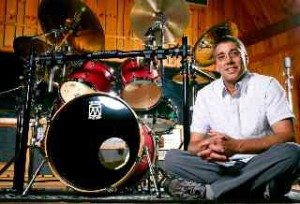 Darren Lyons wasn’t in a rush to quit his day gig as a New York City club employee back in the early ’80s. One day Peter Erskine would be setting up his kit. The next it might be Steve Jordan or Al Foster. Then, at the end of the night, when Darren had stacked all the chairs, he’d sit down at their kits, all the while accumulating the impressive chops he now uses leading The Darren Lyons Group.

“That club was Seventh Avenue South,” Darren reveals. “Sometimes it would shock me when I’d play other drummer’s kits. Erskine’s toms, for example, sounded padded down out front, but they were very live behind the kit. And Jordan really detuned a lug on his 10″ tom, but somehow it still had a nice ring.”

Lyons put this “learning by osmosis” to good use on his recent album, Resonator. In addition, he had conventional instruction from elusive jazzer Michael DiPasqua. And years ago, when Peter Erskine kept an apartment on 23rd Street, Darren would stop by for master classes. “Mike Lauren was also a very good teacher,” Darren adds, “as was Joe Cusatis at the Modern Drum Shop.”

As for Resonator, it came this close to being a train wreck, thanks to flawed engineering decisions such as, in one instance, gating the overhead mic’s. Salvation appeared in the form of engineer John Arrias (Jeff Beck’s Wired, Little Feat, and Barbra Streisand). “He brought things to life in the mix,” Darren enthuses. “And he’s agreed to do our next disc.” Darren will post progress on that front at www.darrenlyons.com.