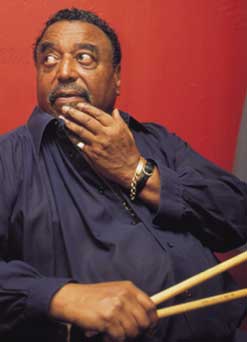 Drummer Steve Davis recalls when The Lynne Arriale Trio, of which he is a member, played at a jazz festival with Chico Hamilton’s group a couple of years ago. “I complimented Chico on how great his band sounded,” Davis says. “He said it came out pretty good, considering that they were breaking in a new bass player.” Davis took the bait and asked how long the new bandmember had been with them. “Six years,” was Chico’s reply – an answer that reflects Hamilton’s sense of humor as well as the consistency of his long career.

Born in Los Angeles on September 21, 1921, Hamilton began working professionally with such musicians as Dexter Gordon, Illinois Jacquet, and Charles Mingus while still in high school. He spent eight years touring with singer Lena Horne, and then received much praise for his work with Gerry Mulligan’s band in the early 1950s. Hamilton began leading his own band in 1955, and such jazz stars as Eric Dolphy, Ron Carter, and Charles Lloyd got their start in Chico’s band.

In 1966, Hamilton became active as a composer for advertising jingles and movie and TV soundtracks while continuing to lead a band. In recent years, he has taught at The New School in New York. Chico has released nearly fifty albums as a leader, including his newest release, Foreststorn, on the Koch Jazz label. The title of the album is Chico’s own given first name, as well as that of his son, who died shortly before the album was completed.

The music, which was all composed by Hamilton, reflects Chico’s wide range of musical influences as well as his swinging, legato style of drumming. A variety of guest artists from the jazz, blues, and rock worlds appear on selected tracks, bringing Chico’s versatility and sensitivity as an accompanist to the forefront.

MD: The new album has a very youthful sound. Is music keeping you young?

MD: On some of the tunes, the groove sections are broken up by freer, impressionistic sections. That made me appreciate the groove even more.

Chico: One is no good without the other. It’s like an artist who uses rough textures and smooth textures. So that was the idea I had in mind about everything we were doing.

MD: On the first tune, “Outrageous,” I like the way you make the stick bounce across the ride cymbal to create that rhythm.

Chico: I originated that years ago, but I hadn’t used that lick in a heck of a long time. It’s very effective.

MD: It gives the tune momentum, but it’s also very relaxed. It reminds me of the advice to “let the sticks do the work.”

Chico: You hit the nail right on the head: letting the sticks do the work by controlling your bounce. Playing with that sort of bounce/finger technique enables you to sustain a little longer in regards to not having to use so much wrist movement.

MD: “That Boy With That Long Hair” has a bossa nova feel, and “Sweet Dreams” has a Latin groove. The name “Chico” implies a Latin heritage. Have you got some Latin blood?

Chico: Well’there’s been rumors. [laughs] My given name is Foreststorn. Chico was easier to say. But there’s some Mexican Indian heritage, among other things.

MD: I assume you heard a lot of Latin music growing up in Los Angeles. So do you feel an affinity for those types of rhythms?

Chico: Yeah, I’ve been playing these kinds of grooves for quite a while. Even during the bebop period, I was still playing my kind of thing. I was always a little different from everybody else, and it wasn’t easy being different. But it was totally impossible for me to play like Jo Jones, Sid Catlett, Sonny Greer, Max Roach, Art Blakey, and people like that. So I had to build my own way of playing.