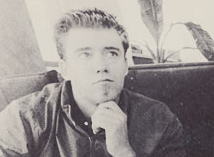 Just when Brian Burwell’s studio drumming career looked like it was about to take off, along comes pop/rock band Neve, asking him to join. It looks like Brian’s decision to put sessions like Michael Bolton aside for the rock life is paying off: The buzz around Neve has gotten pretty loud lately.

“The recording with Neve went great,” Burwell says. “We spent about three months in the studio. We wanted to use whatever drums sounded best, so we had Drum Doctors bring over about five of their best drumkits, and we did a blindfold test. All of us picked the same kit: Peavey. The toms and kick sounded amazing. As for the parts I played, I just went in and nailed them.”

According to Burwell, Neve needs power and energy from him. “The fact that I was a chops guy was what impressed them at first,” he says. “But when the band evolved into a power-pop group, they needed me to play solid, which has been a challenge. They also want me to have some personality on the drums on stage. I’m very into the audience. I try to steal as much attention as I can. And the band says that’s what they want!”