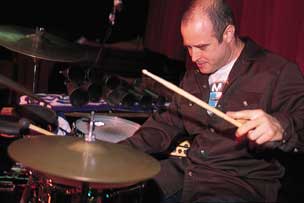 The scene: a cold night in Williamsburg, Brooklyn at North On Sixth, a multi-level hole in the wall jook joint where the bathroom graffiti is more political than obscene. Attracting a crowd of Manhattan intellectuals and Brooklyn deadheads, North On Sixth is tonight showcasing Ben Perowsky’s Moodswing Orchestra. A collection of nutnik New York City musicians, including Perowsky on drums, percussion, and electronics, Steven Bernstein (trumpet), Oren Bloedow (bass), MarKus Miller (turntables/electronics), Glenn Patscha (Wurlitzer piano), and Marcus Rojas (tuba), Moodswing covers every base and then some. They blow through all manner of Martian landscapes and insane asylum atmospheres–just don’t call it jazz. (The dreaded “J” word comes up later.) Earlier in the night, Perowsky worked the same room with Elysian Fields, his longtime groove gig, a chance to play it clean under sinister vocals and simpler pop structures. But for Ben Perowsky, nothing is as simple as it seems.

With his latest album, Bop On Pop, Perowsky teams with his dad, saxophonist Frank Perowsky, and organist Sam Yahel. The album is a beautiful throwback, a sensuous, swinging, svelte slice of organ trio jazz that both shakes like wicked 1950s New York City burlesque and floats beautifully like Willis Jackson or Jack McDuff. Ben is a monster throughout, but a gentle one. If you know the thirty-six-year-old New York City native for his recordings with Mike Stern, you know he can swing. But with his dad and the glowing organ of Yahel, Ben burns on a different level. You can hear great depth and maturity in his drumming, but in particular the ability to stretch and explore with remarkable ease, all while absolutely swinging the idiom.

A few nights earlier on a Steven Bernstein gig, Ben played a solo that worked a call-and-response motif, alternating blazing full-set tribal rhythms with gentle-as-the-wind snare drum shadings. After his solo, Bernstein and crew kicked it with Dixieland. But is that jazz?

And what about his work with avant-garde pianist Uri Caine on Perowsky’s own Camp Songs? Here Perowsky rides a rhythm roller coaster on such songs as “Yigdal” and “Messhall,” culminating in round-robin phrase interaction allowing Perowsky to source everything from Art Blakey to South Indian drumming. But is that jazz?

Or what about Perowsky’s work with Steely Dan’s Walter Becker (11 Tracks Of Whack), or Rickie Lee Jones’ Okay, so Ben has worked and recorded with hardcore jazzers like John Scofield, Dave Douglas, Bob Berg, Dave Kikoski, and Pat Martino. But to catch his big drift you have to consider other records with African master Salif Keita, funk fusioneers Lost Tribe, and prog-rock titans Gongzilla. Those gigs aren’t jazz either, right?

And lest we forget, Perowsky worked his own seminal drums and electronica outfit, Liminal, years before drum ‘n’ bass blew out of the UK. At the North On Sixth gigs, he combined the sweet jangle of Engelhart Percussion bells with the woozy, interstellar sound of sampled bells, confusing even trained ears.

Currently engrossed in launching his Moodswing Orchestra to a wider unsuspecting public and working the occasional trio gig with his dad, Ben Perowsky answers the old Frank Zappa saw, “Is there humor in music?” Ben Perowsky keeps his sense of humor close at hand, only secondary to his massive skills at making music.

MD: You’re involved in so many projects, some of which cross jazz with electronica.
Ben: I don’t know that it’s coming from jazz. That kind of cut-and-paste thing is happening across the board in all genres, from Radiohead to Bjork. I don’t know who is influencing whom. I think it’s cross-pollinization.

MD: It seems more radical somehow for trained, legit musicians to jump into this cross-pollinization. It makes jazz musicians, who are branded anyway, seem even more outside the norm. People still consider you a jazz musician, don’t they?
Ben: They do, no matter how hard I try to shake it. But then, I keep putting out jazz records. What are you gonna do? The pop in Bop On Pop is my dad. I still have my foot in the traditional thing, but I actually haven’t been doing that lately. It’s not where my head is, but I really wanted to make a record with my dad. We’ve talked about it for so long.

The disc sounds so classic because of my dad. He comes right out of that ’50s New York thing. He’s the real deal. He played with Woody Herman, Thad Jones/Mel Lewis, and Buddy Rich, as well as Philly Joe Jones.

MD: It must have been helpful to have a professional musician as a parent.
Ben: I played drums with him when I was five years old – I could barely reach the pedals. We played a lot of duets. We would both be practicing in the house, and then we’d play tunes together. That’s a big part of how I learned standards. He was very supportive, and I had access to all of his records. But I didn’t really know to check them out until Bobby Thomas told me to. He was a family friend and a drummer. Bobby played with Wes Montgomery, Hubert Laws, Eddie Harris, Billy Taylor, and many others. I remember that he pulled out three records for me to focus on: Miles Davis’s Milestones, Cookin’, and Art Blakey’s Big Beat.

I was a little slow to tap into my dad’s music. When I was a teenager I was into Zeppelin and Hendrix. It wasn’t until later that I learned where he was coming from and then started playing gigs with him. Rock came before jazz for me.

MD: But you play in so many different situations stylistically. Do your real roots lie in Hendrix or Elvin’
Ben: I came up listening to the radio and my brother’s rock ‘n’ roll records. I was in love with The Beatles, and Keith Moon and John Bonham were big influences too. Then later, Hendrix lead me to jazz. I heard Jack DeJohnette in the group Gateway. Like Hendrix, they were playing and stretching out, but it wasn’t fusion. I went backwards from there, going back to check out the jazz masters. My dad saw that I was getting into it, so he put on Miles Smiles with Tony Williams on drums. When I heard that, I was amazed. At that point I started going backwards to bebop and checking out the roots.

MD: Did you start practicing more?
Ben: Yes. Bobby started coming over to the house and we pulled out the jazz records. I started practicing a lot and playing along with the records. And Bobby worked on my cymbal beat. He would say, “Play with the bass, check out how Wynton Kelly swings. Sing with the solos. You’re the drummer, play with Miles, play with Coltrane, play with everyone.”

Bobby had gone to Julliard, so he got me into everything. We did rudiments, reading, and he told me what to listen for. I also really worked on shuffles. I would play shuffles through a lot of those jazz records, just to develop a good feel. Shuffles are where it all comes from’that’s the roots. Like Basie, you accent the 2 and 4 and keep the four on the floor. A lot of drummers don’t have that together.

Later on, when I was in Boston, I studied with Alan Dawson at Berklee. But I would still see Bobby all the time. And back then, in the early ’80s, I used to go to the clubs in New York all the time. I went to Mikells, Sweet Basil, Lush Life, the Blue Note”.

MD: Did you see Steve Gadd play at Mikells?
Ben: I would see Gadd through the window at Mikells, which was a block from my house. He was great. I saw Weckl there later on. But it was really Art Blakey I was checking out around that time. Every time The Jazz Messengers played in town, I was there. I would see Jaco Pastorious at 55 Grand Street, and I saw a lot of Billy Hart and Al Foster. They worked with everybody. I saw Al with Miles Davis and Tommy Flanagan. When Al made the Joe Henderson live records at the Vanguard, I was there. Al is a giant of a player. Later, Joey Baron became a big influence.

MD: There’s a lot of divergence on your r’sum’. Are all of these gigs the same for you?
Ben: No. The music for Elysian Fields is coming from a completely different world than Uri Caine. Uri’s gig is an avant-garde trio that incorporates free jazz and bop. It has nothing to do with John Lennon songwriting, which Elysian Fields is about. Those two worlds don’t collide. I think Ringo and Jim Keltner on one side, and Jack DeJohnette on the other.

MD: Why do so many musicians that are trained in jazz not want to be called jazz musicians?
Ben: For me, it’s just too small of a heading to cover everything I do. But maybe in ten years, if I do another record like this one with my dad, I’ll say, “The heck with it, I am a jazz musician.”