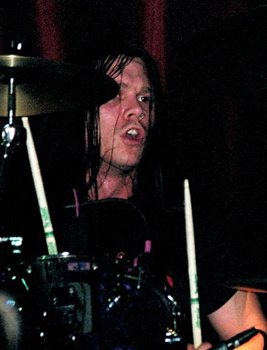 For Killing Heidi drummer Adam Pedretti, the common link between his former band, hardcore rockers NIL, and his present group, the teen-appeal rock band fronted by seventeen-year-old bombshell Ella Hooper, was producer Paul Kosky. “Paul had worked with NIL as producer, so he knew I could play a little bit off-the-wall,” says Pedretti from his home in Melbourne, Australia.

While Killing Heidi have played only a handful of club showcases in the States, they regularly draw crowds in the tens of thousands at huge Australian music festivals like The Big Day Out. They also do in-store record signings that routinely attract up to three thousand fans. “It can get a little bit nuts,” Pedretti laughs.

Killing Heidi’s debut, Reflector, was recorded entirely on Pro Tools, giving Pedretti and Kosky a lot of freedom. “We could play over parts on songs like ‘Mascara’ or ‘superman/Supergirl’ [which feature abrupt time changes], where I could be riding a double kick drum all the way through. By the end of recording we were tracking over drums and doing all this weird stuff. It was a compromise of what Paul wanted, what I wanted, and stuff we made up along the way.”

Pedretti reckons that Reflector provided him with the ability to grow artistically. “I feel I’m a much better player now because of it,” he insists. “Now I can jump into any kind of situation. Whatever we do, it’s no problem.”