A strong debut of demanding originals that’s “out” but inviting.

There’s no doubt that the music on Brooklyn-based drummer Kate Gentile’s debut album as a leader is difficult to play, and, for the uninitiated, perhaps difficult to listen to. But even if her through-composed modern jazz pushes the limits of tone and meter, the music is actually infused with plenty of melody peeking through the clouds, and the group is so tight that rhythms enter and exit in cohesion. On “Trapezoidal Nirvana,” Gentile works the tune’s jagged structure between her snare and ride cymbal, before comping behind Matt Mitchell’s piano solo with an array of staccato kit bursts and brief cowbell play. And check out the way the drummer seemingly stretches the time on “Alchemy Melt (With Tilt).” Gentile lays down a conventional beat on a couple of tunes, highlighting her well-developed feel, but the vibe here is of group interaction and compositional invention of the contemporary kind. (Skirl) Ilya Stemkovsky


Jamison Ross All for One

Jamison Ross won a record contract when he wowed judges at the 2012 Thelonious Monk Institute of Jazz drum competition. But he had more surprises in store. His 2015 debut, Jamison, not only showcased ace drumming but impressive vocal talents as well, resulting in a Grammy nomination for Best Jazz Vocal Album. While this follow-up spotlights vocals even more, Ross’s drumming is still key. This groover knows when to subtly support and when to let it rip. Lifted by Ross’s tight working band, the mix of covers and originals draws from wide influences, spanning Fats Waller to ’60s/’70s R&B to modern jazz, often served with plenty of New Orleans seasoning and a modern perspective. The ballad “Don’t Go to Strangers” is a soulful vocal highpoint pulsed by ultra-minimal brushes. In contrast, Ross swings hard on “Everybody’s Cryin’ Mercy” and mightily funks it up on “Call Me.” What’s his next direction? Wherever he pleases. (Concord Jazz) Jeff Potter 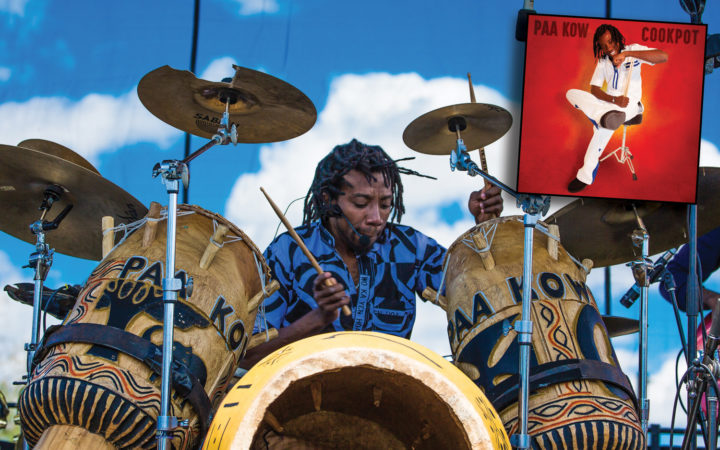 It’s easy to get hooked by this fusion of highlife, funk, and jazz.

The Ghana-born, Colorado-based drummer Paa Kow possesses a great feel, evidenced in the slinkiness of album opener “The Way I Feel,” with bold fills added from a range of percussion sources. He has a very playful side as well, breaking into a 2-and-4 backbeat over a 6/8 just for fun, tossing in a nifty two-bar bass drum fill on “Meetu Ehum,” and heating up the polyrhythms at the end of “Cookpot.” “I Made a Mistake” and “Go With It” are as funky and brain-twisting as some of Herbie Hancock’s late-1970s brew. And there are several jaw-dropping “No they didn’t!” moments here featuring Paa Kow’s precise and beautifully intentioned playing, sly and subtle ensemble shadings, rhythmic conversations with bassist Tom Ogunribido, and musical accents setting up the amazing horn play. (byallmeansband.com) Robin Tolleson 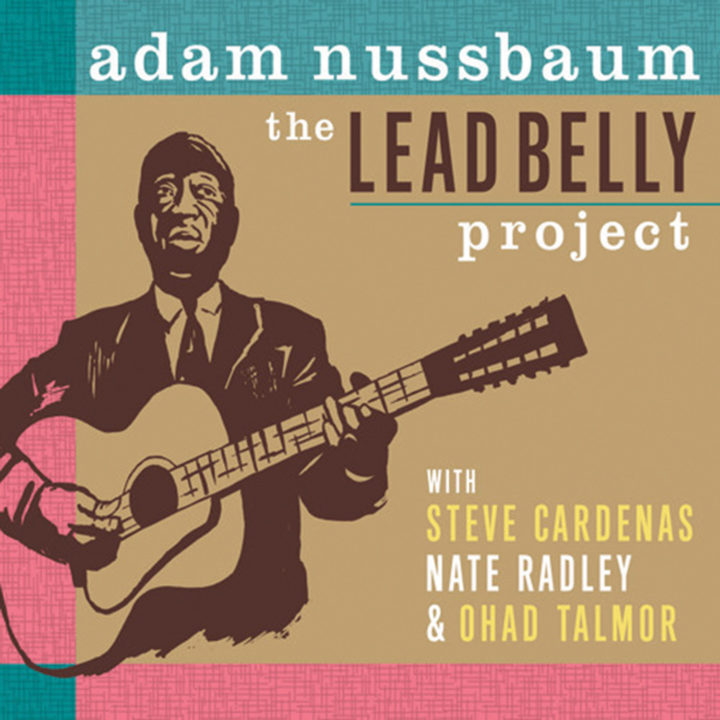 Performing the songs of the legendary folk singer Leadbelly with a quartet of drums, saxophone, and two guitars creates a joyous sound that is as pleasurable as it is cleansing.

A Leadbelly fan as a child, Adam Nussbaum wisely omits bass guitar on his new recording as a leader, lending the music an elastic buoyancy while also allowing his drums to shine, a revelation free from lower-frequencies. Anyone over the age of forty will know these Americana standards, including “Black Betty,” a 1977 hit single (with revised lyrics) by the New York City rockers Ram Jam. Each song, from “Bottle Up and Go” to “Green Corn,” floats and unfurls, radiating the elation of improvisation with melody at its core. Nussbaum masterly prods and pokes the performers, with sticks and with brushes, his big swing beat a consistent delight. (Sunnyside) Ken Micallef 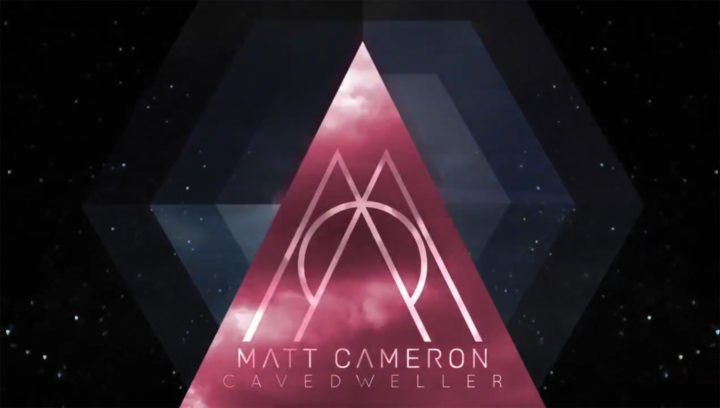 Ripping a page from the Soundgarden playbook, the band’s drummer returns—with a twist.

Enamored of the drumming and music of David Bowie’s final album, Blackstar, Pearl Jam/Soundgarden drummer Matt Cameron hired MARK GUILIANA to bring his always-something-special to this collection of hard rock melodies and turbulent beats, while Cameron handles vocals and everything else. Playing off Cameron’s Ableton Live demos complete with programmed drums, Guiliana plays it deep, fat, and groove-hard.

Click here to read Cameron’s thoughts on the album.

larger-than-life drummer is the depth of the subject’s abject pain.

Despite his many problems, Jerry Nolan thumped with just enough panache and swing to transcend his self-abuse, and his performances on the New York Dolls’ classic self-titled debut and the Heartbreakers’ L.A.M.F. take these albums into rightfully legendary territory. Songs like the Heartbreakers’ “Baby Talk” and the Dolls’ “Trash” are heightened by Nolan’s breakneck pacing and crystalline simplicity.

Author Curt Weiss’s strength is his unflinching eye toward the real Nolan. The drummer comes off as a deeply flawed, difficult, even toxic person, and we see his musical brilliance arrive despite his unrepentant addiction to drugs and conniving disregard for basic human decency. Weiss reveals a profoundly insecure, irredeemable individual who was also the best rock and punk drummer in New York City at the time. Nolan, Dolls/Heartbreakers guitarist Johnny Thunders, and the rest were true musical outcasts—people who would betray their ardent fans and caretakers for drugs, and whose transcendent moments arrived when they needed to generate money for the next fix. Perhaps it’s a dubious legacy, but Weiss’s tale is harrowingly essential. Weiss is a drummer as well, so there’s lots of attention to the technical elements of Nolan’s studio performances, which elevates this book beyond the ordinary. (Backbeat Books, $24.99) John Colpitts 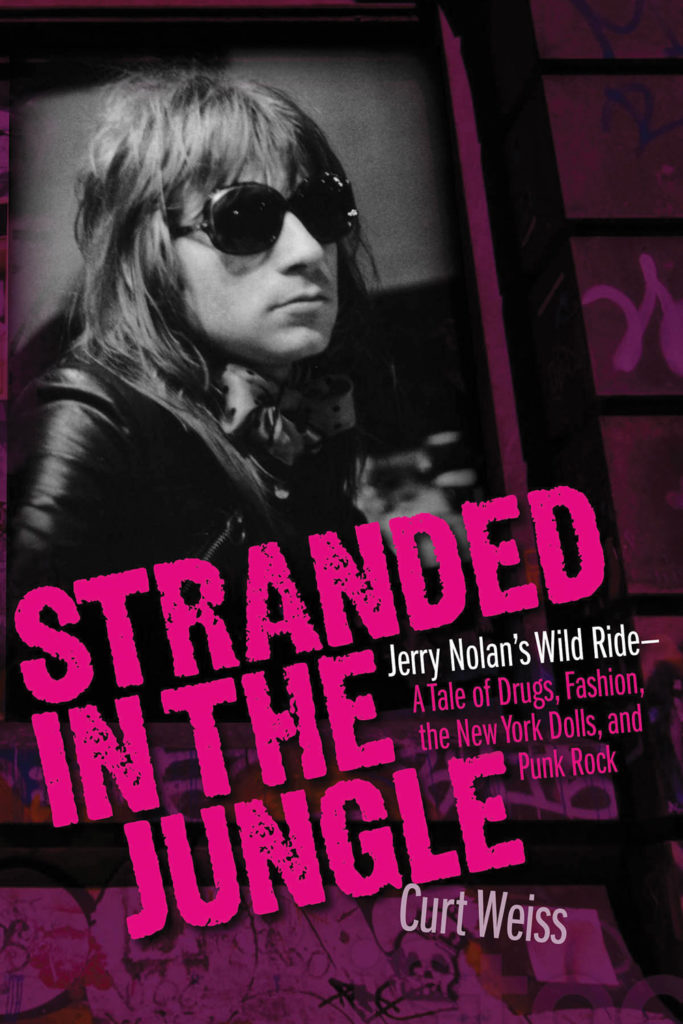