Following the dismissal a while back of bassist Ross Valory and drummer Steve Smith over an alleged “coup attempt” within the corporate structure of the band, guitarist Neal Schon announced yesterday that Narada Michael Walden will be Journey‘s new drummer.

Schon also revealed that former Journey member — and American Idol alum — Randy Jackson will return as bassist, and composer Jason Derlatka will augment the hit-making act with vocals and keyboards.

Walden, of course, is a Grammy-winning producer, songwriter, and vocalist, and he has been the drummer for Mahavishnu Orchestra, Jeff Beck, and others.

In the video, Walden is playing a white-with-gold-hardware DW kit — a nice tip-of-the-hat to Louie Bellson’s famous white/gold Rogers kit?

Check out our April 1982 interview with Walden. 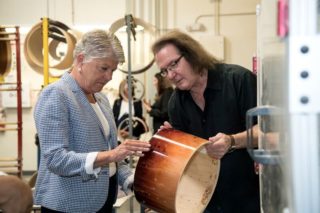