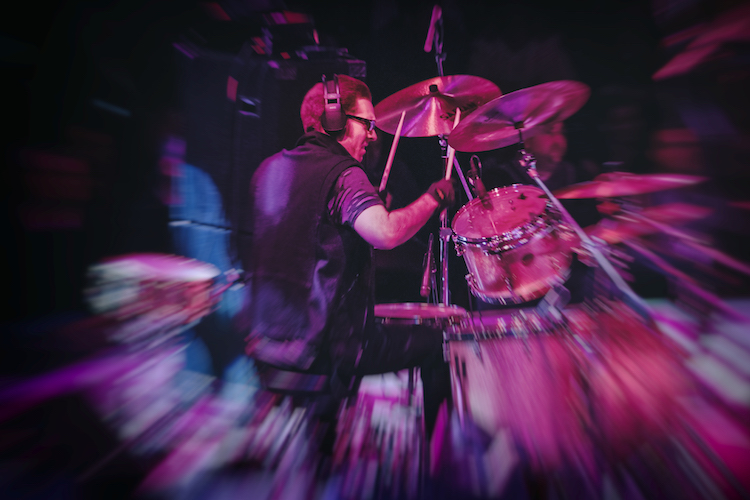 Hey MD! My name is Max Silverstein and I play the drums. I grew up in a musical family; my dad is a drummer and my mom is an incredible singer. So whether it was Chicago or Led Zeppelin or Elvis, there was always music playing. There was also a set of drums in the living room and the garage, so it only made sense that when I was ten years old I asked my dad if he’d teach me how to play. Little did I know that I’d still be playing nineteen years later.

I grew up idolizing rock star drummers from John Bonham to Steven Adler, Matt Sorum, and Michael Shrieve (tearing it up at Woodstock). But I must say, the guy who influenced my playing the most was none other than Ginger Baker. His drum solo on the Blind Faith song “Do What You Like” has always been to me the absolute example of how to structure a drum solo. It was smooth, rhythmic, and built perfectly, ultimately ending in double bass mania.

When I was about sixteen I was lucky enough to study with the legendary Carmine Appice of Vanilla Fudge and Rod Stewart fame. Carmine really taught me a lot. We would literally go through his book Realistic Rock learning different beats and patterns, including his “falling rocks” pattern that I use to this day. I always remember Carmine yelling at me to “Hit ’em harder! Hit ’em harder!” I’m happy to say we still keep in touch to this day.

I play in the two-man rock group No1Cares with my brother Dillon. We have an EP titled Mentally Unhealthy. We also have another album on YouTube called Valley Daze under the band name Still Rebel, which we used to go by. In terms of playing live, we’re an LA-based band and play locally. Our go-to spot for a long time was the legendary Kibitz Room on Fairfax Blvd. As of late we’ve been playing periodically at the Whisky a Go Go on Sunset. We like to look at our performances as rock ’n’ roll meditations by giving people an escape from their daily existence. And besides rocking them, we want to soothe them.

I look at drumming in general as a form of meditation. It’s something I can do that just sets me free. I can sit down at the kit whether I’m feeling happy, sad, or anywhere in between and just go to another place. It’s just a pure representation of human feeling and emotion. When I sit down at that kit I’m that same ten-year-old kid who began playing so many years ago. Playing truly is its own reward.

As far as my go-to gear, really anything will do. As long as I have my Iron Cobra double bass pedal and a nice pair of Vic Firth SD9 Drivers, I’m good to go. Thanks to Modern Drummer and Billy Amendola. And thank you for reading!

For more on the duo, visit www.no1caresmusic.com/.