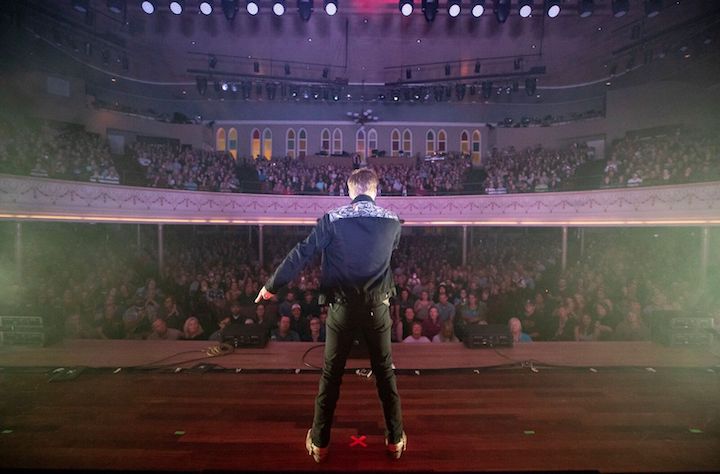 Hey Modern Drummer readers! My name is Adam Rupp and I’m really pumped to be here. My story may be a bit different from others you read here “On The Beat,” since I don’t technically play the drums. I’m actually the vocal percussionist for Home Free—country’s only all-vocal band. Since winning NBC’s The Sing-Off in 2013, we have released five studio albums. Our latest, Dive Bar Saints, dropped last month, and we’re currently on our Dive Bar Saints world tour, hitting sixteen countries with more than one hundred shows through next year.

My earliest beatboxing memory is from fifth grade. I was in the hall at school, after picking a fight and then laying down a beat. At the time, I didn’t know beatboxing was an actual thing, so nothing ever came from it until I took it upon myself to really learn during my freshman year of college. That was when we started Home Free.

Going to college is a transitional time in one’s life, and I was just discovering beatboxing and other beatboxers. I was intrigued by how they were imitating drums and effect sounds, and I was hooked. I’d spend hours repeating one sound over and over, experimenting to get it right, which likely resulted in my first-year roommate leaving after just one month. (Now, looking back, I see how awkward it must have been, so I can’t really blame him.)

Beatboxing did not come naturally to me. In the beginning, I sucked. Maybe I had some natural talent as a musician, but it was a long, slow growth that got me to where I am today (and I’m still growing). Most beatboxers, including myself, are self-taught to some extent. Because I got my start long before YouTube how-to videos existed, I had to learn from CDs, VHS tapes, and MP3s, until the first website popped up with beatboxing resources.

With nineteen years of practice under my belt, I honestly have no idea what time commitment that equals, but I’d venture to say months of my life have been spent honing my craft. Now it’s more play and experimentation. You can practice something almost whenever you want to, especially around other people, and especially when you’re close to them. Now that I mention it, that’s the best time so that they know you’re serious! 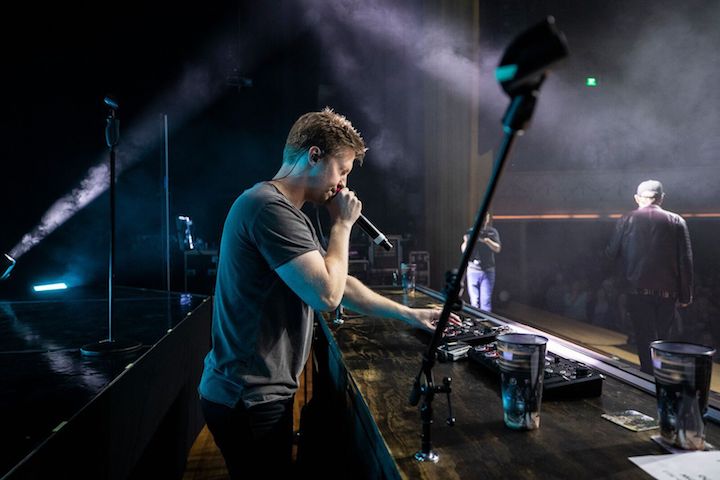 Back to Home Free. In 2000, my brother approached my best friend and me to put something together for a church talent show, and let’s just say that performance will never see the light of day again. For seven years after that, Home Free lingered as a hobby for the most part, while we struggled and toiled in the hopes of one day being able to make a living doing what we loved. We faced a lot of adversity, as most musicians do, losing money to perform shows for dozens of people, dealing with rejection and naysayers, all while attempting to do every part of the business ourselves. Dozens of singers cycled around the core group, while we kept trying to build something.

Life gets in the way, as everyone knows, but through persistence we kept slowly improving what we were doing, not only in our show, but also in our business practices. In 2007, we had developed ourselves enough to break into the cruise industry. Then two years later, we connected with an agency that filled in our schedule with fairs, festivals, colleges, and corporate shows. By 2011, with all that working together, our schedule had made us a full-time, small-market touring act.

We were fairly content with what we had established, but then we won season four of The Sing-Off on NBC in 2013. We had auditioned the three seasons prior and were never selected. When the fourth season came along, we were unsure about even trying out, but our tenor, Austin Brown, pushed us to do one last audition. I’m glad he did because with our country-based group lineup, we smashed it and then went on to win the whole thing.

These reality shows provide you with a very small window of opportunity, leaving it all on the artist to make the most of that time once your season wraps. You work harder than you ever have on the show, and then you somehow manage to work even harder before the limelight dissipates. Luckily, because of the experience we had, persistent work ethic we’ve learned, and an incredible fan base, we were able to make the most of the small window and become the international success we are today. (I mentioned YouTube earlier, thank goodness it’s around nowadays. Our fans eat up the videos we post, and we have more than 319 million views on our channel, thanks to them!)

Our fifth studio album, Dive Bar Saints, dropped last month and marks a new step in our career, as we’re going from focusing on cover songs to releasing almost all original tracks this time around, including one of my all-time favorite songs, “Love Me Like That.” It’s been interesting to see the fans’ reactions to this change—they love it just as much as we do. Growth and change, as artists, are very important to us, and we’re always looking to do what’s new for our fans and us. On this tour we’re started to incorporate looping tech, allowing us to build vocal layers upon our live show and deliver even more to our audiences, which has been really fun to explore.

I know these “On The Beats” usually end with some info on go-to gear, but since my gear is technically just me, here are my favorite parts of my job: nailing inward vocal sounds, distortion, sirens, and outward throat bass. The crowds generally love feeling a thumping bass and sounds that make them think it’s something other than a human. What audiences don’t enjoy is when the beat gets off or becomes confusing, so I would say to any new beatboxer start simple and tastefully throw in a sound or two to keep it varied. Practice with a metronome and give the audience a danceable, simple beat, where they can feel the bass and backbeat. Let it grow and vary before jumping to something different. Play around with fun sounds in the transitions and then incorporate those into a beat. Always save your biggest booms for the end.

When it’s all said and done, growing in this skill really comes down to how well you learn through imitation and mimicking what you hear. You can get instruction on how to make a certain sound, but through repetition, experimentation, and adapting what you hear yourself doing, you’ll eventually find the right technique to make the sound you’re trying to create. That being said, I would never consider myself a master of anything, including beatboxing. The hardest sounds are always the ones I haven’t done yet. But if I had to choose one that might top my list as “most difficult to master,” it would be vomit. Vomit beatbox would be hard.

Watch Adam in the studio working his magic here:

and the title track off their latest album, Dive Bar Saints, here