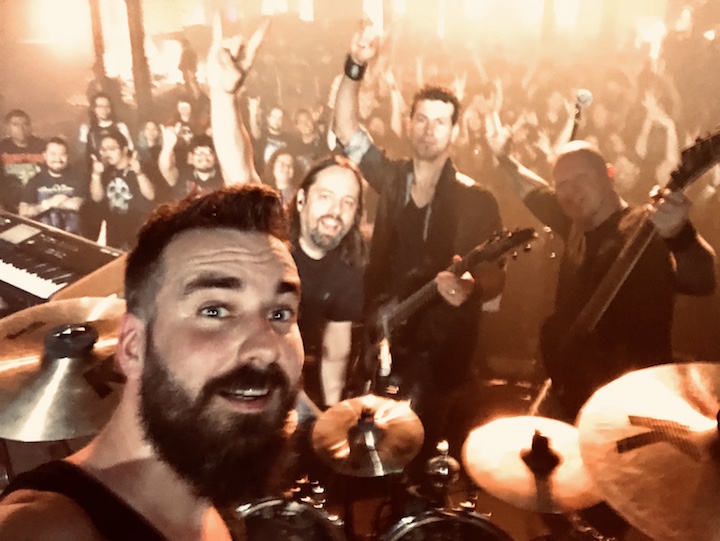 Talking About Influences, Tours, and Gear

Hi there, MD fans and fellow drum enthusiasts! My name is Frederik De Wilde and I’m currently living in Ghent, Belgium. Drumming has been the biggest passion in my life since I was nine years old.

It all started when I enrolled in percussion classes and played with the local Harmony Orchestra in Lochristi. This sparked my interest in playing all kinds of percussion instruments, melodic and rhythmic. The Internet was gaining in popularity and I quickly discovered my favorite drummers and biggest inspirations: Roger Taylor, Mike Portnoy, Tony Royster Jr., Marco Minneman, Glen Sobel, and Travis Barker.

Bands like NOFX, Blink 182, Sum 41, and New Found Glory heavily influenced my first experiences in live drumming. The fast rhythms and mostly happy sounding riffs colored my childhood. We played a lot of shows in youth clubs all around Flanders, and I knew I would be doing this for a long time!

As years passed by, I got more into metal, playing in a nu-metal cover band for quite a while. Being pretty popular with audiences that were in for a party, I couldn’t help but feel the urge to make original music again. That’s why I didn’t hesitate for too long when I heard that the band Fragmentum was searching for a drummer.

In February 2019, I went on an audition and felt it clicked with Jan, Gunnar, and Herwig, both personally and musically. They just finished recording the album Pugnacity and wanted to embark on a tour to promote it, hence searching for a live drummer.

Two months later we played seven shows in the North American leg of the Hexed tour with Children of Bodom. I felt very fortunate to be part of such a professional and organized tour and the audiences where really positive. Thanks to our booking agent Music Metal, we had the chance to play four dates with Soulfly on their European tour this past June. At the moment we are out promoting the album and are already working on new music. I look forward to my drum parts for a new album!

When it comes to my gear, I have always been in love with DW drums. I play the Collector’s Series (Maple/Mahogany), combined with Zildjian Custom K cymbals. My snare drum is a 6.5×14 Ludwig Supraphonic. I hit all those with Promark sticks. Most of the hardware is Pearl, including my double drum pedal. For drumheads I prefer Remo.

I hope to catch you at one of our shows, and check out www.fragmentum.zone for more. Thank you to Modern Drummer!