Talking About Gear and Recording Easter Is Cancelled

The recording process for Easter Is Cancelled was different from our last album Pinewood Smile, in which we just threw ourselves into a rehearsal room for two weeks and left with a bunch of arrangements. This time we weren’t rushed so we took our time, and it took eight months! We came up with the arrangements on acoustic guitars before stepping into the studio to play them. Once we thought they were ready, Dan Hawkins (the Darkness guitarist and producer) and I started playing them to get a good take of just the drums and guitar and build from there.

We played around a lot with the arrangements for Easter Is Cancelled. This is obvious on tracks “Heavy Metal Lover,” “How Can I Lose Your Love,” “Rock and Roll Deserves To Die,” and “Easter Is Cancelled.” All of the middle eights and endings to those are usually worked out live in the studio. We even canned about six or so finished tracks just because they didn’t quite cut it—painful but necessary.

We thought we had the whole album pretty much finished when we realized we didn’t have a fast-paced song on the record. Our frontman Justin Hawkins and bassist Frankie Poullain looked at Dan and me and said, “Go on, then!” The title track “Easter Is Cancelled” was the only song we didn’t even think about—just walked in, sat down, and somehow played the first three or so bars of the song. Then we just grinned at each other! It was really heavy, super fun to play, and fast and powerful enough to take your head off, and we knew we had it. It didn’t take long to finish it after that and I think it’s my favorite track on the record.

Another notable thing about the recording of the album was working on the song “Heart Explodes.” We’d been working about twelve hours, it was late, and I was tired and lost concentration for a second. It’s a very tom-tom pattern driven song and I somehow managed to stick a drumstick in my left eye socket! I’ve smashed myself in the face with sticks, cracked my knuckles on the floor rims, and sliced fingers on cymbals before, but never stuck a drumstick in my head! I stupidly then drove home and called my sister (a GP), who made me go to the emergency room to get it sorted. I guess what I’m saying is, make sure you buy the record otherwise I might go blind in one eye for no reason!

Watch The Darkness videos from Easter Is Cancelled:

“Rock and Roll Deserves to Die” 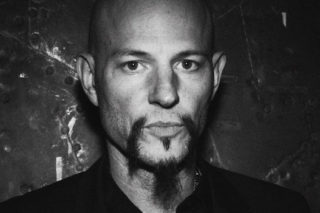 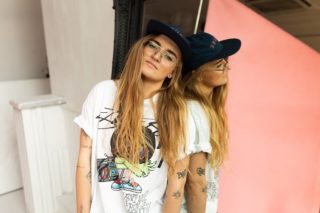 On The Beat With G Flip

Enrico Calvano of At The Soundawn

Peter Landi of Marco With Love