Hi everyone! Ringo Starr’s seventy-ninth birthday was on July 7, 2019, and every year (as the clock strikes noon) he asks his friends and fans around the world to join him in saying, “peace and love.” This year, because of Ringo and the good people from Modern Drummer magazine, I got to share the experience with Sir Richard in person! The trip to LA just happened to be close enough to my friend Steven’s fortieth birthday, so we decided to make a weekend out of it. I can safely say that meeting Ringo will go down as a birthday neither of us will ever forget.

As for meeting the man himself, what can I say other than it was an unforgettable experience. Ringo Starr laid down the beat for arguably one of the greatest bands of all time, but after meeting him in person, I realized the crowds flock to see him not just because he’s a former Beatle, but because he’s a genuinely amazing person. Some people love him for the music, others because of his philanthropy and message of peace and love, but what I found especially touching were the comments from those who told me how they look up to Ringo as a role model for individuals who have struggled with addiction.

The truth is, I didn’t spend a whole lot of time with Ringo, as so many people want a piece of his time (even the director Peter Jackson stood patiently in line). What I did get was to spend an afternoon with a bunch of his friends, including the amazing drummers Denny Seiwell, Sheila E, Jim Keltner, and Gregg Bissonette, all of whom had smiles on their faces because Ringo Starr has, in some personal way, made their life a bit brighter.

Thanks again to everyone at Modern Drummer, Ringo and Barbara, Jules Follett, and Beautiful Day Media for this amazing experience!

This meet and greet is part of the new “Give The Drummer Some…” experiences for Modern Drummer subscribers. Next up is a cruise in our Runaway To Paradise promotion where one lucky Modern Drummer subscriber is eligible to win a cruise from Barcelona, Spain and meet Jon Bon Jovi and his drummer Rich Scannella. Stay tuned for the Carl Palmer Prog Rock Camp launching soon. 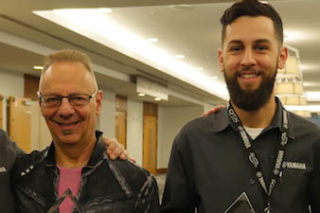 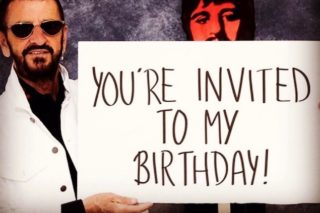