Hi everyone! It’s an honor to be featured “On The Beat” again! I play in the band Moon Tooth and we just finished a tour with Mark Morton’s project Anesthetic and Light The Torch. We also just released our second full-length album, Crux, on March 29, which was co-produced by Mark Morton, Machine, and myself. Mark and Machine worked with us during pre-production and I engineered, mixed, and mastered everything at my recording studio, Westfall Recording Company, in Farmingdale, New York. My partner Anthony Lopardo and I have been working together for more than ten years now and run the business.

For this tour, I used a Precision Drum Co. acrylic set, a Ludwig Black Beauty 6.5×14 snare, 24″ kick drum, 12″ rack, 16″ floor, with a Remo Powerstroke 3 on snare batter and Powerstroke Pro on kick drum batter, and Evans EC2s on toms. I love this setup! As far as cymbals, I’ve been using all Sabian. I recently became an endorser of the company and couldn’t be happier. My current setup includes AAX 18″ and 19’” crashes, 15″ Artisan hi-hats, and a 22″ HH power bell ride that kills it. It has a deep sounding bell and crashing on it isn’t harsh; I’ll never use anything else. The Artisan hats are smooth and dark, which is perfect for recording or live performances. I’ve also been using a DW9000 double pedal for years now. It feels great and I haven’t found a better sounding beater for what I’m looking for. I’ve settled on Vic Firth 2Bs after going through every size and company I can think of—they just have great balance and weight, and aren’t too top heavy.

Check out some footage from the drum tracking for “Awe At All Angles,” the third single off the new album Crux, here:

Moon Tooth will be Supporting Animals as Leaders and the Contortionist in May for select dates on the East Coast.

5/24 – Nashville, TN at the Cannery Ballroom 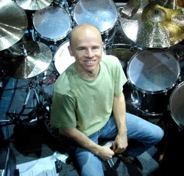