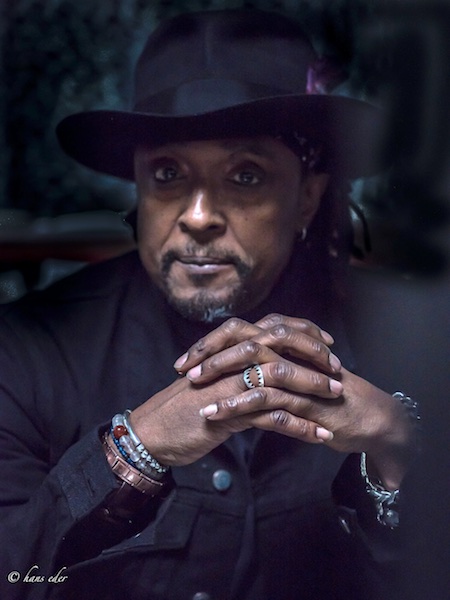 Hello everyone in Modern Drummer land! Inside Out is the name of my new LP and it’s a reinterpretation of songs written by Keith Richards and Mick Jagger for the Rolling Stones. As I was finishing up my last LP, The Bura, I started thinking about my next project. There were many ideas but this is the one that took root. It’s full of drummers and percussionists and I’m so grateful they worked with me on this album.

The recording started with hand drums and percussion so I’ll start there. Walfredo Reyes Jr. was the first cat to join me in the studio. The beginning of the day started with us talking about Africa Brazilian and Latin American rhythms. I grew up in NYC in the Queensbridge projects, a predominantly Afro American, Puerto Rican, and Cuban hood, and the rhythm came from everywhere. It was a time when blacks and Latinos hung out, ate, laughed, and danced together. The day started with Frankie Crocker (DJ from WBLS) and finished with Symphony Sid.

Back then soul and salsa played in the same clubs. For this album, Walfredo played cajón, African djun djun, LP congas and bongos, djembe, talking drum, a custom African drum, Argentinian bombo, Uruguay candomble drum, claves, caxixi, shakers, and shekere. My New York brother Lenny Castro and his arsenal consisted of three LP classic congas, shekere, djembe, and a beer can shaker. Lenny sent me a quote for this OTB: “Doing this project with my brother Bernard took me back to the time of the Last Poets. It’s a primal story with just words and rhythm. It’s the predecessor to rap and hip-hop. The real deal! Dig!”

I needed some really low sounding drum tones for two of the tracks and I called my drummer friend Josh Eagen, who is a real drumhead and collector of cool drums. He played an early 1972 Rogers 18″ KOA floor tom detuned. The other drum was an early ’70s Slingerland 8×26 marching bass drum detuned as well, with a coated Remo Powerstroke 3 and felt muffle strips so it had a deep punch and sub bass to it. I wanted it to be close to a bass without it being a bass.

After those tracks were mostly done, another good friend from NYC called and came by to help a brother out and that was none other than Steve Jordan. He played on all the heavy percussive tracks and used a Black custom Gretsch vintage Round Badge with an 18″ bass drum, 8×12 mounted tom, 14×14 floor tom, and Paiste Traditional series—22″ ride, SJ custom 17″ hi-hats, and a DW flat hi-hat stand.

Steve didn’t come to the session alone and he bought the brush master himself to add even more rhythm and that was Clayton Cameron. Now come on! How hard was I grinning? Let’s put it this way, my face is still hurting along with my neck. Clayton played an engraved Ludwig Black Beauty snare and his signature Regal Tip Clayton Cameron model brushes.

There are three tracks on the LP with a full rhythm section and holding down the groove was Vince Wilburn Jr.! At Steakhouse studio he used a Yamaha PHX Phoenix kit with a 22″ kick, 12″ and 13″ rack toms, 14″ floor tom with legs, and a 16″ floor tom. At Dots Way studio he used a Yamaha Hybrid Maple 24″ kick, 12″ rack tom, 14″ and 18″ floor toms with legs, and all Zildjian cymbals: 16″ hi-hats, 20″ crash, 18″ crash, and 22″ ride, all prototypes. He also used a 22″ Crash of Doom, various Yamaha prototype snares, Vic Firth 1A sticks, Remo Ambassador smooth heads, and various LP hand tools. His neighbor Kevin Carr supplied the clock on “Time.”

Being a closet drum man myself I couldn’t let all this go down without getting my hands dirty. I played various LP hand percussion that included shakers, tambourine, cowbells, egg shakers, maracas, triangle, and a candombe drum, made for me by the Uruguayan condombe master player and drum maker Lobo Nunyes. 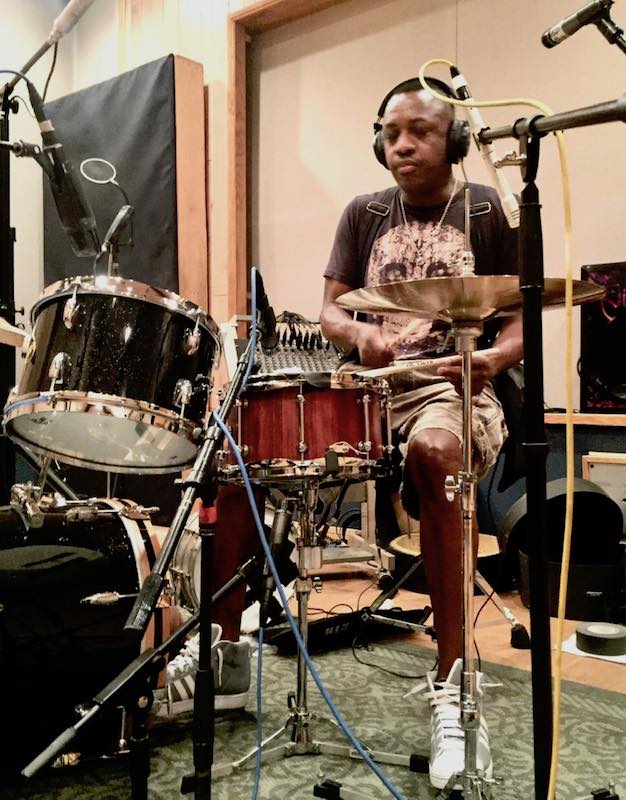 As primarily a singer, the reason why I’m telling you all this is because the drums are the center of the music on this album. In creating this project I’ve been blessed enough through my years in music to have met and played with some of the masters of the drums. The list of drummers I’ve been able to play with over the years is a long one and I’ll just list a very few of them: Charlie Watts, Lenny Castro, Terrion Gulley, Brian Blade, Steve Jordan, Will Calhoun, Steve Ferrone, Walfredo Reyes Jr., Charley Drayton, Lenny White, Alvino Bennett, Dave Goodstein, Sammy Figueora, Omar Hakim, Sterling Campbell, Zack Alford, Sly Dunbar, and the list goes on and on. I can’t claim to play anything like they do (I’ve got one beat that I can rock!) but I’ve been around long enough to know what feels good. Enjoy Inside Out and keep listening and keep on playing!

Photo of Bernard by Hans Elder