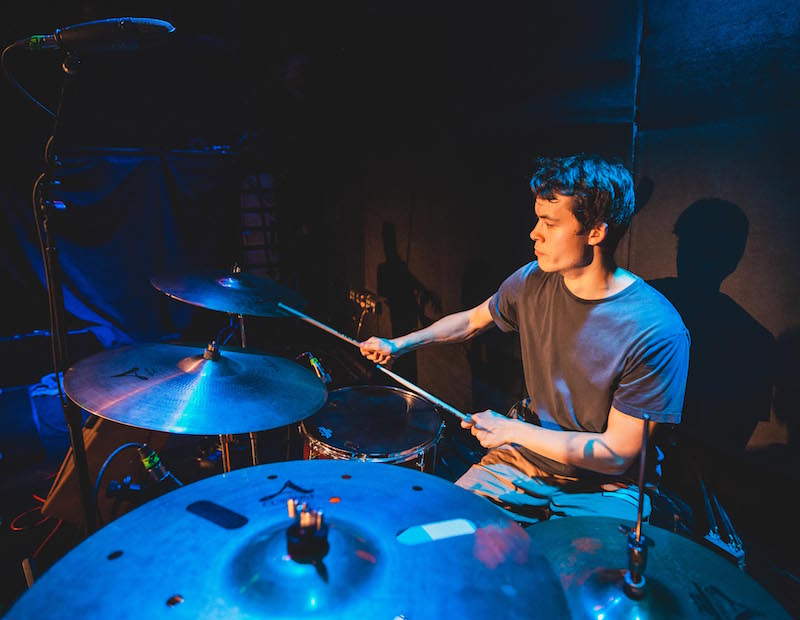 Staying Loose and Keeping It Tight

What up, Modern Drummers! I’m Miles Clyatt from Juice, which began in a cramped Boston College dorm room. After bunking our beds to make space for my Roland TD-11, my roommate Dan (on guitar) and I began hosting jam sessions. Rappers would freestyle over our live beats and before we realized what was happening, our room had become a revolving door of musical mayhem.

Things got crazy when Christian, Juice’s violinist/rapper, started coming from the main campus. Dan and I lived on the “lame” freshman campus and Christian lived on the “cool” main campus with the rest of the school. So you know it was legit when Christian was leaving the “cool” campus to come chill with us! To put a cherry on top, our singer Ben moved to our floor halfway through the year, having taken the first semester off to compete on NBC’s The Voice. We then filled out the rest of the ensemble and boom there was Juice! We started gigging in Boston, advancing from local clubs to touring around the country.

In 2016, we won Summerfest’s Land the Big Gig competition where we met our producer Johnny K (Plain White T’s, Disturbed). We’ve been recording with Johnny ever since and have released five songs with him. In fact, by the time this is published, we’ll be in Nashville with Johnny recording at House of Blues Studios! Last year, we appeared on NBC’s The Today Show. In January 2019, Juice embarked on a three-month nationwide tour.

Juice hits everything between rock, hip-hop, R&B, and jazz/improv while maintaining pop sensibility. I’ve learned through playing all these styles that the groove is the only thing that matters. I try not to worry too much about licks. I focus on keeping that pocket real nice, and on giving my limbs the independence they need to spontaneously react and create the tension/release that kicks the band into overdrive. “Stay loose, but keep it tight” is my mantra. Our bass player Rami (my “Rock of Gibraltar”) will tell you the same thing.

I play a Yamaha Tour Custom with maple shells. I put an extra fat chain on my metal Gretsch snare and use a vented batter head. This way, I get the depth of the metal shell but the vented head adds brighter definition. The fat chain adds extra clarity for a satisfying crack. I’m a Zildjian cymbals guy, rocking A Custom hats, A Custom 18″ EFX, 19″ crash, and a 23″ Sweet ride. If you haven’t tried a 23″ ride, “Don’t do it!” You’ll never be able to use a smaller ride again.

My biggest influences include John Bonham, Chad Smith, Billy Martin, Jon Fishman, and Benny Greb. Thanks for reading! Keep an eye out for new Juice tunes in 2019 and follow me @c_l_8 and Juice on Instagram to keep up with the tour. Hope to see you on the road!