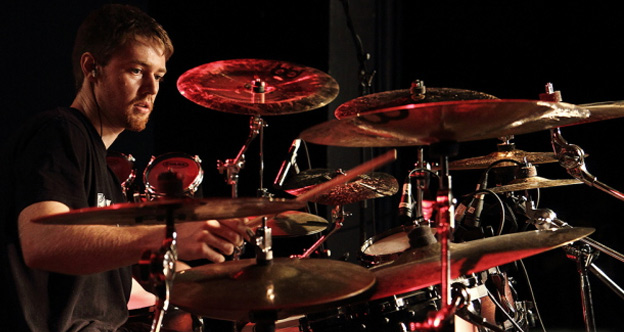 Hello MD! There are some things that only drummers will understand. Sure, when your car is packed with equipment and you can barely close the doors, anyone might get that—we’re movers! I’m not talking about obvious things though. I’d like to speak about what goes on in the mind of a drummer during a performance in certain situations. Yeah sure, on stage some drummers have a look on their face like there isn’t anything going on inside; but I think that you might have experienced something similar too.

By the time we were ready to shoot it was past midnight and I became more and more tired. After six takes I finally nailed it. I’m quite a perfectionist, so the crew had to show some patience until I was satisfied with my playing. Alex the video guy and his crew did a fantastic shot, and the video looks killer! After the recording I had to mix it, which was fun. There is no artificial reverb used in the mix. As you can see, the venue was huge.

I mean sure, the song isn’t simple. When I wrote it I wanted it to be great collection of prog-metal drumming. It has a lot of parts, odd time signatures, complex fills, and also some faster double bass stuff. And a small drum solo too. But all of that I rehearsed to a point where it’s (almost) second nature. If it isn’t working well the worst thing you can do is try to force it. I noticed that I play best when I just don’t care and do it for sheer fun. But here I’m recording a video, which should be the best representation of my playing. So I have to take this seriously. How do I resolve this conflict?

What I really learned in live situations is to get into a Zen mode. I think that ninety-percent of your performance depends on your mental state of mind. It always does the trick for me to repeat a mantra in my head: “You’re not a doctor, you’re not a pilot. No one dies if I make a mistake. It doesn’t matter.” And it worked. I sat outside for a while, ate a sandwich, and once I felt calm I went inside and did the take. And I do stare a lot— that’s the facial expression of focus. Think about that the next time you watch a Neil Peart video. I think he just might be in his Zen zone.

I’m really excited to finally show you this new play-through video. The idea was to blend progressive rock with death metal. This is also reflected in the drum line, which you can clearly hear (and see). Thank you for reading!