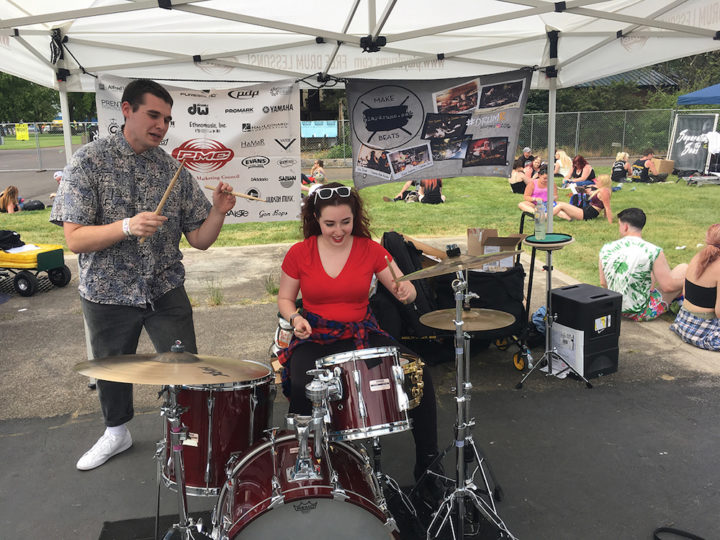 For the sixth year in a row, Percussion Marketing Council (PMC) sponsored Free Drum Lesson Lab Tents at Vans Warped Tour (VWT) sites across the country. This year, retailers at six of the national VWT tour dates participated, connecting with youth-oriented markets in local communities by providing free beginner drum lessons. This grass-roots approach exemplifies PMC’s mission to create and expand the next generation of drummers.

Billy Cuthrell, a PMC member through Progressive Music, Raleigh, NC, and program director for the PMC VWT initiative, introduced the idea eight years ago at an all-members PMC meeting. “I had been pushing to get outside the normal channels—for finding and growing new drummers,” he says, explaining that the idea is to target young, active music lovers who attend concerts and inspire them to become active music participants—specifically, drummers. “VWT attendees matched our target demographic perfectly,” says Cuthrell.

PMC loans playdrums.com tents, which are shipped directly to designated VWT locations from PMC headquarters in Cleveland, Ohio. Each year the PMC Board reaches out to retailers offering them the opportunity to manage a PMC Free Lesson Tent by providing drum lessons to the local area youth market that attends VWT events. It’s a win-win for the retailers as they get to connect with potential new customers in their market with very little investment. “That’s a big draw for retailers,” says Cuthrell. “The booth space is valued at $2,000. And since PMC provides the tents as a nonprofit participant, it’s a free, high-visibility space in front of 30,000 captive music lovers.”

For young VWT fans, it’s a rare opportunity to sit behind a real kit. “The Vans Warped Tour is a fun atmosphere and neutral ground for participants, so the intimidation factor disappears,” says Cuthrell. “It’s the perfect alternative to the retail setting, where all drumsets are for sale and the stores can’t just let people sit down and play.”

“For the retailer, they have opened the door to build a relationship with potential new customers,” continues Cuthrell, who is a successful music retailer and drummer himself. “It makes sense to be physically in front of customers, collecting names and contact information, so you can stay in touch.”

Rupps Drums hosted a tent at a late June tour stop in Denver, Colorado. “Each student at their event filled out a contact card,” says Josh Beyers. “We used the card to follow up and possibly develop new students for our studio. I met a lot of people! Great people and fun vibes.”

Drummer and educator Mark Powers worked with Rhythm Traders of Portland, Oregon, to provide drum lessons. “I had a blast teaching lessons at the Vans Warped Tour in Salem, Oregon,” says Powers, who estimated they taught around one hundred lessons on that Saturday in June. “Another twenty to thirty existing players dropped by to rock out for a few minutes. We found that allowing a player to jam for a moment attracted even more attention from passersby.”

PMC member Hal Leonard Corporation, represented by Brad Smith, was on hand at the tent at the Milwaukee, Wisconsin, stop hosted by Cascio Music Super Store. “It still amazes me—every year,” says Smith. “A new crop of young people wants to play drums, and more than half of them are ladies. These are our people.”

Plans are developing for the 2018 PMC-VWT summer tour with dates and locations appearing on the PMC website in early spring.