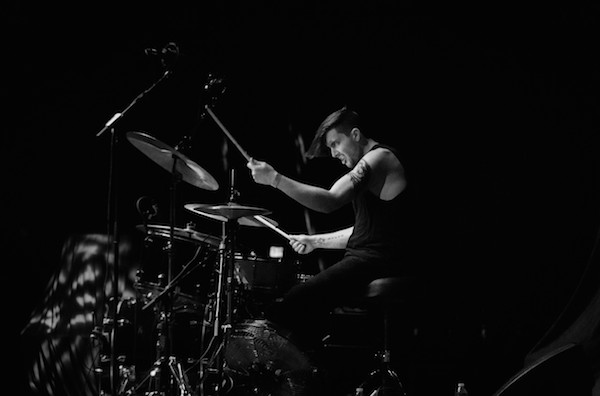 Metal and shoegaze genre slashers Deafheaven are currently ripping across the country on a tour that lasts through late March. The band, powered by blast-beat maniac Daniel Tracy, first saw breakout success with its 2013 release Sunbather before tracking the well-received 2015 follow-up, New Bermuda. Here Modern Drummer Online asks Tracy about building the brutal wall of sound he creates each night with the band, Deafheaven’s plans for 2017, and more.

MD: How do you develop speed around the drumset?

Daniel: Developing speed on the set is all about the hours you put into it. The idea is to push yourself beyond your previous limit. Sit down and play single rolls until you physically can’t anymore. Then start it all over again.

MD: Who are your influences and favorite drummers?

Daniel: I read an interview with Dave Lombardo of Slayer when I was a kid, where he described his balls-to-the-wall speed mentality behind the kit. It made a huge impression on me. Pete Sandoval of Morbid Angel is a total machine who introduced me to mechanical, ultra-technical blast beats. And Trym [Torson] from Emperor has always been my favorite black-metal drummer. He has a jazzy, “open” feel to a blast beat, using a single kick while incorporating closed hi-hat hits and inventive ride patterns.

MD: Are there any parts in Deafheaven’s material that you can say you’ve taken from these players?

Daniel: Deafheaven uses a lot of extended blast sections that owe quite a lot to early-’90s black metal greats such as Emperor and Mayhem.

MD: Some of your parts seem to create such an intense wall of sound followed by periods of melodic calm. Is there any concept behind this tension and release?

Daniel: Deafheaven’s song structures are built around extreme dynamics and compelling transitions. So, from a drum perspective, it’s about knowing when to overplay and when to hold back and let the melody shine. If anything, I try to match the riffs as well as possible to create a cohesive feel within the entire instrumentation.

MD: Deafheaven’s set seems physically demanding. Do you have a warmup routine?

Daniel: I actually don’t typically warm up before a set, although I’ve been incorporating wrist stretches to loosen up the muscles beforehand.

MD: How do you prepare for a tour in which you’re playing at a high level of intensity every day?

Daniel: While Deafheaven is between tours, our guitarist Shiv Mehra and I play in our band Creepers, which keeps me behind a kit all year and ensures that I’m prepared for anything that might come up. Creepers released an album titled Lush in 2014, and we have plans for a full-length in 2017.

MD: Did you take lessons growing up? And how did you start playing?

Daniel: I started playing drums when I was eleven. I began on a snare and eventually moved on to a set when I was twelve. I took lessons at a local music store in the California East Bay for a couple of months, but I grew tired of the snare-centric beginning stages. So I branched off and started recreating Pantera and Metallica songs in my garage.

MD: Are there any challenges to being on the road for extended periods of time?

Daniel: Being on the road as much as we have the past several years has been the most amazing experience of my life—as well as the most trying. I’m lucky to have bandmates that I consider close friends, which makes the whole experience much more adventurous and enjoyable. It’s all about finding the balance between road life and maintaining an ounce of normalcy back home.

MD: In the past, it seems like some outlets have applied certain labels to the band, or have tried to define your sound. Do you care about labels or think you need to fit into any specific genre?

Daniel: I think the whole idea of needing to apply a genre name to a band is relatively new. Consider “metal” tours from twenty years ago. They would have completely different-sounding bands on the bill, because that’s what people wanted. Who wants to go watch the same band four times in a row? Variety is key to discovering new concepts you wouldn’t have otherwise. Isn’t that the point of being a musician or artist?

MD: Besides the current tour, what does Deafheaven have planned next?

Daniel: We have a busy year ahead of us including tours, festivals, and writing new material. We’ll continue to keep a strong work ethic well into 2017.

Daniel: I use a Tama Starclassic birch/bubinga three-piece kit with an S.L.P. Dynamic Bronze snare, Tama Roadpro hardware with an Iron Cobra double pedal, and Istanbul Xist series cymbals: 14″ hi-hats, a 19″ crash, a 20″ ride, and a 22″ ride. I like to play a slimmed-down set to keep my fills inventive without relying on extra pieces and frills.