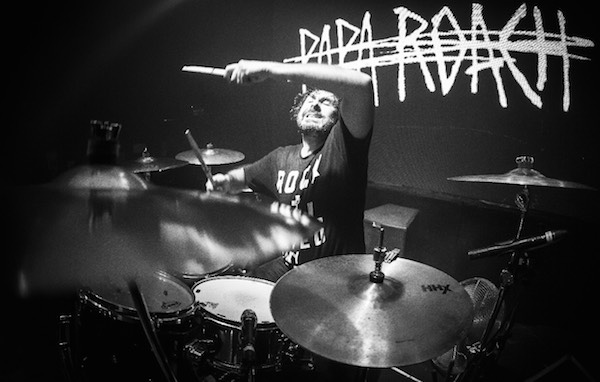 What’s up, all of you in Modern Drummer land? It’s Tony Palermo here from Papa Roach. I’ve been in the band now for almost ten years.

If you already follow us, you know that we’re no strangers to the touring world. It became apparent that we needed to take a break from the road, not only to give ourselves a break, but to also spend some time with our families. We spent a good part of 2016 in the studio writing and recording songs for our upcoming May 2017 release called Crooked Teeth.

We’ve already dropped the song of the same name late last year and just released to radio our first single called “Help.” On this record we are exploring and stretching our boundaries once again. You’ll hear some rockers and some stripped down tunes along with some rapping that basically put the band on the map. We’ve always felt that it’s our job to not only challenge ourselves but to challenge the listener as well.

Papa Roach has always strived for a natural evolution and this record is no different. We have put together a collection of songs that we feel serve as its own playlist. Lots of musical dynamics and powerful, positive messages are things we always try to achieve.

We will be doing some Canadian dates coming up in April and then onto the US spring festivals. I look forward to seeing some new and familiar and faces out there! Thanks for reading and I hope you dig the new record.