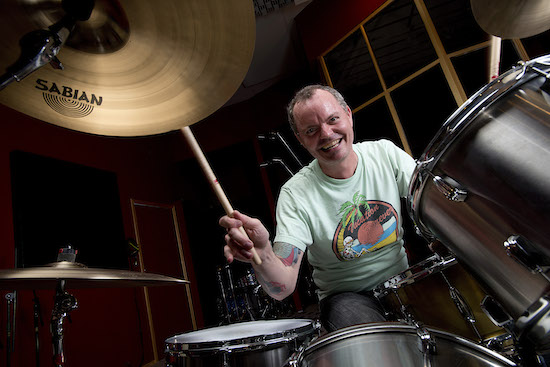 Red Fang, the hard-rock/metal powerhouse from Portland, Oregon, released their fourth studio album, Only Ghosts, this past October. Drummer John Sherman is currently throwing down his blazing fills and powerful, no-frills grooves with the group as they tear across the country on tour through mid-December. Modern Drummer recently dug into the newest record and tour with Sherman.

MD: The drums sound huge on the new album. What went into this record’s drum tones?

John: I used a Q Drum Company stainless-steel kit for this recording, and I couldn’t be more pleased with the way it sounded. I didn’t have any specific sounds in mind other than the typical “huge drums” that every rock drummer shoots for.

As soon as we got to the studio—which was in [producer] Ross Robinson’s house, where we lived for the duration of the recording—we jumped right in by setting up drums and getting sounds. I was extremely excited about working with Ross and very open to any ideas he had concerning drum sounds. When he asked if I had ever recorded without the resonant heads on my toms, I said, “No, but let’s give it a shot.” So we took off the bottom heads, messed around with mic placement, and quickly realized that this was the right move. There was a ton of attack, but I think Ross was also able to capture a well-rounded tone.

The drum room at Ross’s place is amazing. It’s the opposite of what I thought a drum room should be. It’s super small with low ceilings, but something about it is magical. It’s like a little sweat cave with rock walls and weird angles, and it gets super hot and cozy quickly. I love it!

MD: Live, it seems like you’re a hard hitter. Is there anything you have to do practice-wise to prepare for playing at an intense level every day on tour?

John: No matter how hard I try to replicate a live show in a rehearsal setting, I’ve never been able to do it. There’s something about the adrenaline rush of being on stage in front of real people that pushes me to another level. So even though I try to condition my body, I only really get into the groove once we’re actually out there doing it. I’m pretty sore after the first few shows, but I get used to it pretty quickly. You have to stay hydrated and stretch.

I’m not a very “smart” drummer—I don’t achieve maximum efficiency like the best drummers do. But for me it’s not about being the best drummer. It’s about having a good time, and I have a good time beating the hell out of my drums. I guess I’m a bit more primal than some drummers.

MD: What’s a typical day like on the road with Red Fang?

John: The boring but true answer is that there’s a lot of traveling and waiting around. Traveling from city to city involves many hours of sitting in the van and passing the time by reading books, burning up the battery on your smartphone, telling stupid jokes, eating terrible gas station food…. Then you arrive at the venue and unload, set up, wait around for the sound engineer to get set up, soundcheck, go get some dinner, and kill time before the show. If we’re lucky we’ll be in an interesting area and we’ll see some sights or find some killer food. But the best part of the day, and the whole reason I do this, is the hour or so we get to be on stage doing what we do. Then we break down the gear, load it all up, get some sleep, and repeat the whole process. Of course, there are times when it’s much more exciting than this—like when we get to play shows on the beach in Sardinia or killer festivals like Hellfest in France. But the bulk of touring is a lot more boring than most people might imagine.

MD: How often does the band get together before a tour to rehearse?

John: We get together at least three times a week when we’re in the swing of things—sometimes more if we have a big tour coming up or we’re getting ready to record. I feel like the more often we get together, the less stressful our sessions will be. If we only have a few chances to jam, I’ll put way too much pressure on those rehearsals. But if we have lots of time, we can relax and not worry about using every minute of the day to practice. My favorite moments are when we’re all sitting around talking shit and laughing with each other, and those moments are hard to come by when you have limited time. It’s nice to take deep breaths, chill out, and not watch the clock. This is supposed to be fun.

MD: Do you warm up before each show?

John: Not really. I usually keep a pair of sticks in my backpack, which is always backstage, so I’ll warm up on my knee for ten to twenty minutes or so, but nothing too crazy. I like to stretch out a bunch too. 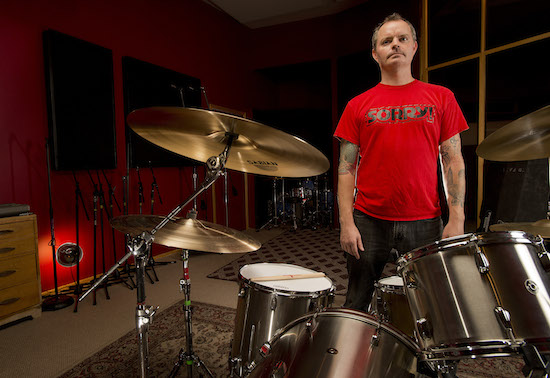 MD: Is there any room to improvise in the live set, or do you stay close to what’s recorded?

John: We stay pretty close to the script usually, but there are a few moments where we allow for improvisation. We’ve never been a very “jammy” band, but there are definitely spots that change from night to night. It’s all about feeling it out. We don’t really have to watch each other that much. We just feel what’s happening.

MD: There are some pretty blazing fills in Red Fang’s music. What do you work on for speed around the drums?

John: Lately I’ve been searching YouTube for lessons. It’s crazy how everything is at your fingertips now. You can literally type in “improving speed around the drumkit,” and tons of videos will come up. They aren’t all helpful, and some can be boring or ridiculous. But I’ve found some pretty amazing stuff out there, like Mike Johnston’s linear triplet fill. And [the YouTube channel] Bonzoleum has some great videos. He’s a little kooky, but so am I. He has a good way of explaining things. Check out his video on the drum-fill ending to Led Zeppelin’s “Rock And Roll.”

MD: You seem to have a pretty minimal setup compared to some other drummers in Red Fang’s genre. Have you always used the same setup?

John: I’ve been playing the same setup, more or less, for over twenty years. I’m just comfortable behind a four-piece kit. Sometimes I toy with the idea of adding another rack tom or a floor tom on my left side, but I haven’t had the [courage] to pull the trigger. Change is hard!

MD: Who are your influences?

John: My earliest drum hero, and still my all-time favorite drummer, is John Bonham. I’m sure I spent a lot of time imitating his style. I love how powerful yet smooth he was. He almost slides around the beat while hammering it down. But there are many drummers who have influenced me. Dale Crover [the Melvins] and Dave Lombardo [Slayer] are also early influences, and they remain at the top of my list. Other top dogs are Matt Cameron [Soundgarden], Mac McNeilly [the Jesus Lizard], Coady Willis [Big Business, the Melvins], Jon Theodore [Life Coach, Queens of the Stone Age], and John Wright [NoMeansNo]. I’ve taken something from all of these guys.

MD: Can you describe your gear?

John: I’ve been playing a stainless-steel kit from Q Drums, but I’m switching to a maple Q Drums kit before the next U.S. tour. I use an 18×24 kick, a 9×13 rack, and a 16×16 floor tom. I’ve been using a ’70s Ludwig 6.5″-deep Supraphonic for years as my main snare, but I’m also going to be using a 7″ Q Drums aluminum snare soon. They’re amazing. I use Tama hardware—a Speed Cobra single kick pedal, a Speed Cobra hi-hat stand, two straight stands, and one boom. I mount my rack tom on a snare stand. I use Sabian cymbals, and currently I’m playing 14″ AAXplosion hi-hats, a 19″ and 20″ AAX Metal crashes, and a 24″ AA Medium ride. I play Promark 5B hickory wood-tip sticks and Evans heads. I like the coated G2s on the batter side of my toms and clear G1s on the resonant side. I absolutely love the Evans HD Dry heads on my snare, and I use a coated EQ3 on my bass drum.