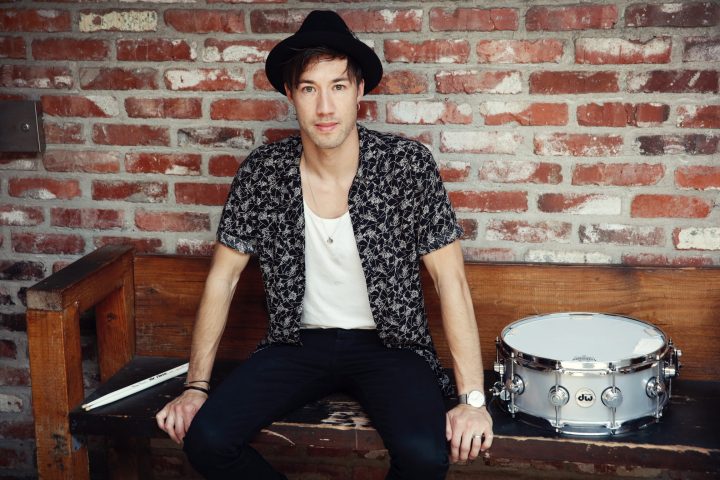 Brendan Buckley, who initially grabbed the attention of many of us as the drummer with the international superstar Shakira, is seemingly in constant motion. The past few years have seen him backing Miley Cyrus, alt-roots vet Shelby Lynne, actress Minnie Driver, Chinese singer Jason Zhang, Chilean rocker Beto Cuevas, Singaporean multi-talent JJ Lin, and Brazilian legend Roberto Carlos, among others. Right now he’s out with Canadian pop duo Tegan and Sara. Here we talk to Buckley about that gig, and about how to survive in the complex, demanding world of modern freelance drumming.

MD: How and when did you hook up with Tegan and Sara?

Brendan: The drummer position for Tegan and Sara was offered to me this past spring by their current musical director, Kristopher Pooley. He contacted me to set up a “meeting”—not an audition. We all met up at Sara’s apartment to get to know one another, and things went well. We discussed music, electronics, touring, pets…. It also helped that I’m friends with the drummer from their previous tour, Adam Christgau.

MD: What are the playing priorities of this particular gig? And, in a sense, should the priorities be the same for all gigs?

Brendan: Some priorities for playing the drums are universal, and can be applied to all of one’s musical projects; topics such as “a good feel,” “solid time,” “proper tone and dynamics”…. Other priorities can differ slightly from job to job. With Tegan and Sara, it was important for me to be able to offer them a variety of approaches for each of their songs. The fully sampled electronic version. The acoustic drum version. A broken-down, unplugged version. They wanted to experiment a lot during rehearsals. And they wanted to get away from their previous arrangements from prior tours. Therefore, qualities like flexibility, patience, and sensitivity were all equally important as playing to a click.

MD: Can you talk about the gear you’re using on tour? How do you cross the divide between acoustic drums and modern recorded sounds?

Brendan: From day one, the musical director and I discussed the ways to perform the songs from their new album, which has programmed electronic drums, plus their older indie-rock material. For the first several days of rehearsals, I set up an acoustic drumset, which comprised of a kick, two different-pitched snares, three toms, hi-hat, ride, and two crashes. Then, around that drumset I placed Roland electronic trigger pads, kick triggers, and acoustic triggers, all wired into a pair of SPD-SX sampler pads loaded with all the sounds from their new record. This allowed me to mix and match sounds and parts until everyone was happy.

MD: You’ve performed live with many artists over the years. Each time you come into a new situation, is there a period where you and the tech people have to learn each other’s preferences in terms of monitors, setup time, soundcheck, etc., or are these sorts of issues fairly standard when you get to the bigger acts?

Brendan: Yes, with each new musical situation, there is a mountain of logistical things to work out, like travel details, equipment, soundchecks, hotels, and overall etiquette. But I find that almost everyone at this level is super professional, and those issues get ironed out fairly quickly. It definitely helps when each person on tour is sympathetic to every other person’s job. Less ego, more teamwork!

MD: What’s your preferred method to stay in touch with family and friends when you’re on the road?

Brendan: Well, Skype was the original “game changer.” Free internet phone calls…and then the addition of video chatting! But now I can’t imagine touring without FaceTime. It’s important to see your loved ones. But that being said, I still like to juggle a bunch of different formats: email, texting, social media—even old-school letters and postcards!

MD: You’re usually very busy, playing with any number of acts in a given year. How do keep all your obligations from conflicting? Has modern technology made that easier, or more difficult?

Brendan: Scheduling is one of the most difficult and frustrating facets of being a freelance musician. Although I keep a very detailed and organized iCalendar, everything always seems to shift around, shorten, double, or get postponed or cancelled. And when jobs overlap, it’s important for you to handle it professionally. Fortunately, I have some fantastic drummer friends that can fill in and slay the gig on a moment’s notice. A network of talented peers is priceless.

MD: How about eating healthy and getting enough sleep and exercise on the road—any hard-found wisdom you’d like to share on those topics?

Brendan: Ah, I love this topic. I’m a bit of a nutrition nut! Yes, I believe in keeping one’s body in proper shape and well-fed at all times. And it’s easier to do a little bit every day than to try to overhaul yourself. I could go on and on about this, but here are just a couple of tips.

Here’s another thing to try: Avoid eating after 10:00 p.m. No after-show meals (pizza, pad thai noodles, chicken wings). If you’re hungry, just drink a ton of water, go to bed, and eat a huge breakfast in the morning. And if you simply cannot make it to bed without eating, have an apple or a banana.

Regarding sleep, that’s always been a problem of mine. In high school I got accustomed to surviving on three to four hours a night. But now I can feel the dangerous and damaging effects of sleep depravation, so I’m doing my best to give sleep the same importance as exercise and nutrition.

MD: What was your first major tour, and how did you fare on it? Did you make any amateur mistakes that you still cringe at when you recall them today?

Brendan: My first big tour was with Julio Iglesias back in 1997-98. I was straight out of music school, and it was the first time I experienced in-ear monitors, drum throne thumpers, sequencers, tall drum risers…. I was very “green” back then, but I can’t think of many cringe-worthy mistakes. However, I could have definitely done more research before going into the gig. I remember only learning the thirty or so songs that were sent to me by the musical director. But Julio would often, out-of-the-blue, start singing other hits from his massive catalog of tunes, and I wouldn’t know what to do. I’d just tap 8th-notes on the hi-hat! Nowadays I normally learn all the greatest hits of an artist…just in case! Be prepared.

MD: Please name a few must-have items on the road, either personal or drum gear-related.

Brendan: A book. A passport. An iPhone. Gear-wise, I rent more often than not nowadays. With companies like DW, Sabian, Vic Firth, Remo, and Roland, a drummer can get great instruments anywhere around the globe. Traveling light can be a Zen-like experience.

MD: Since becoming professional, what’s the most people you’ve played for, and the least? How do you stay enthused when a gig is disappointing in one way or another? And how do you stay composed when it’s an unusually important and/or stressful performance?

Brendan: The least amount of people is easy: just the soundman and the bartenders! The largest audience, I can’t be sure. With Shakira, we’ve done some big outdoor venues and festivals—between 250,000 and a million people.

I find it easy to remain enthused about a gig when I focus on the act of playing the drums well. I love the drums! There’s so much to work on, so many ways to improve. Usually I just close my eyes, put my head down, and try to play with a combination of concentration and joy.

To help overcome stressful situations, I’ve practiced a few types of meditation throughout the years. Focus on the breath—deep breathing—and let the mind go blank. If you’ve practiced the songs and the movements thoroughly enough, your limbs can go on autopilot while you spend time quieting the storm in your head. Inhale. Exhale. Relax.

MD: Do you have any tips for drummers negotiating fees with an artist that is significantly more popular than anyone they’ve previously played with?

Brendan: Nowadays, the rates for playing the drums are all over the place. Astronomically high numbers, and embarrassingly low numbers too. It’s good to have in mind a wage that you would like to receive—in a perfect world—and also a baseline number that you will not go under. That gives you some room to negotiate. Other factors can affect how much you’d like to do the gig too. Who else is in the band? Where are the shows? How long is the job? Who is the artist, or how is their music? Sometimes you can find value in things other than the money.

MD: So many instrumentalists are overwhelmed—and often bummed out—by the changing nature of compensation in the music biz. Are you more of the mindset that some kind of battle needs to be waged against the “powers that be,” or do you see the situation as a natural evolution, and just try to manage your career in a way that is most effective in the current climate?

Brendan: I can answer “yes” to both of those options. Yes, legal battles need to be waged to ensure that music isn’t “free,” and that artists, songwriters, producers, and musicians get compensated for making and distributing their artwork. However, this is also a time of evolution, and the excess of money in the music industry might never be like it was from 1970 to 2000. We’re in a leaner, thriftier era.

MD: Finally, like us, you’re a Jersey guy—anyone back home you want to give a shout-out to?

Brendan: Although I’ve spent the second half of my life in Miami and Los Angeles, I still get back to New Jersey several times a year to visit my parents, drop by Roxbury High School, Ritchie’s Music, and the Music Den. My longtime Jersey buddy Tommy Igoe moved to San Francisco, so I guess he’s “West Coast” now too! Whaddup, Modern Drummer?!?