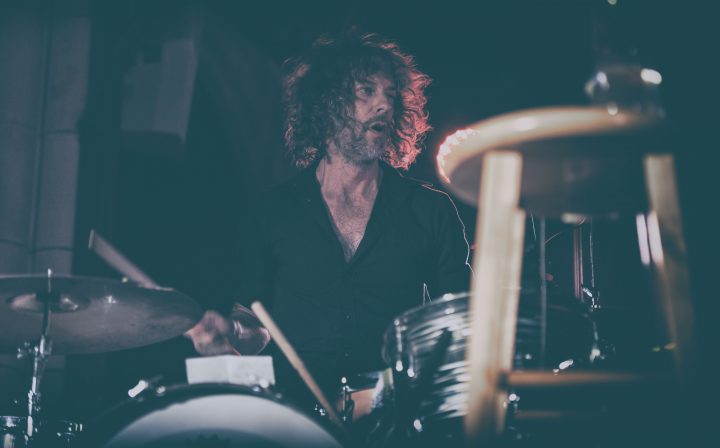 Wow, MD—it’s an honor! I’m a touring musician (Vandaveer, Horse Feathers, and Small Batch, among others) and the session drummer at Shangri-la Productions with producer Duane Lundy in Lexington, Kentucky.

I started playing drums at age eight. It began with private theory lessons, followed by jazz/concert/marching bands. I began touring professionally when I was eighteen. Twenty-four years later, I’ve logged thousands of shows across this big, weird planet, half of them with These United States, Tarbox Ramblers, and Vandaveer. Recently, I had the honor of performing at Ringo Starr’s seventy-sixth birthday party at Capitol Records (I know, right?).

Early influences were Ringo, Max Weinberg, Russ Kunkell, John Bonham, Jim Keltner, and Liberty Devitto (I grew up in Long Island so if you weren’t a Billy Joel fan, you pretty much had to fight a dude). Coming of age in the early ’80s, I grew up on classic rock, prog/’80s metal, and ’60s/’70s singer-songwriters. Once my mom took me to see Rush in September of 1984, it was on! I can still sketch out Peart’s kits on loose-leaf paper. Nowadays, I just want to sound like Brian Blade—go figure.

For singer-songwriter material (the majority of my work), I prefer a click track for a tight, clean performance. I’m also a songwriter. My initial focus is not always the drums. I like playing to the vocals—Dylan’s phrasing, for instance, is as much a rhythm performance as any drum part. If an artist makes a lyrical reference to a ticking clock, will I go to the rim and click a bit? No, but I think along those lines. I might accentuate a dark line in the song by riding the floor tom, or a soft, pretty line, with a sizzle or whispery mallets. I don’t have a stock fill or go to an “obvious” place just because the track may be standard Americana or blues.

I use the studio itself as an instrument. If that means brushes on an armchair is the primary drum track, then good! Keep the broken gear—cymbals, heads, warped toms—fingernails on a snare head, shaking a busted inside kick head. Out-of-tune can be as effective as what’s in tonal balance (think the end of the Kinks’ “Strangers”).

Come find me on the road. I like pizza, wine, and talking rock and roll. Thanks for reading!

For more on Robby and Vandaveer, visit www.vandaveer.net and www.facebook.com/vndvr.