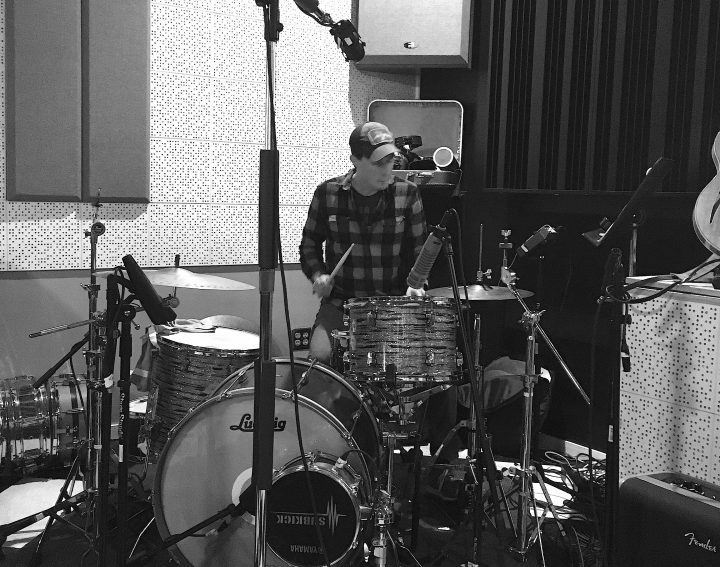 Mark Stepro is an in-demand studio and live performer who handles everything from alt-country to rock. The drummer, who placed in MD’s 2016 Readers Poll in the Pop/R&B category, can be heard on new records from Gaslight Anthem’s Brian Fallon, the Wind and the Wave, and Butch Walker, who calls on Stepro to lay down drums on many of his productions, as well as his own live tours. Mark’s also involved in projects with Nickel Creek’s Sara Watkins, White Sea (with Morgan Kibby from electro-pop band M83), former Taylor Swift backup singer Liz Huett, and guitarist Adam Levy. Here we delve deeper into the making of Walker’s latest, Stay Gold, as well as the fine art of juggling gigs.

MD: Stay Gold sounds like you guys were having fun.

Mark: It’s California ’70s rock. That music is not a challenge or a stretch for us. That’s not to say we don’t take it seriously, but there’s not a lot of fussing with the music. It was with the same people we usually record with and in the same studio.

MD: How do you prevent yourself from keeping the first part that comes to mind each time?

Mark: At 30,000 feet, it’s got to be boom pap, boom-boom pap, but what little askew, minutely screwed up thing can you do in there? It might have to do with ghost notes, or the surface that you’re using. It might have to do with where you start a fill. The guy who’s paying you and whose name is on the marquee still feels the boom pap, but there’s now an itty bit of personality in there. So anyone really paying attention can ask, “Oh, what’s that all about”?

MD: Did you mess with a hundred different snare drums?

Mark: No, just a couple. Very little editing, straight to Pro Tools. We just have a Ludwig kit set up. Butch has really good-sounding pres and mics. When Butch is in recording mode, everything’s moving really fast. I think we share the same idea of what drums are supposed to sound like in that context. There’s not a lot of deliberating about it. There’s the louder, pingy rock snare, and then the fat, birthday-cake dead ’70s snare. Those are generally the two we alternate between. I just walk in with a stick bag, really.

MD: Were you getting a bunch of direction on parts from outside artists?

Mark: We were recording a track for Gavin DeGraw. Those guys [Walker, DeGraw] are like, “Yeah, do whatever you want,” but they’re oddly specific about kick patterns. And they’ll say things like, “That fill going into the bridge, start it a bar earlier.” Then they’re like, “No, forget that.” Your brain is getting pulled around everywhere. You have to take in and process a lot of information in a very short amount of time, and then you’re often asked to disregard ideas that don’t work after you’ve committed them to memory. So it can feel like a high-pressure IQ test sometimes. But it’s a challenge I deeply enjoy and thrive on.

MD: Talk about juggling projects when you have conflicts.

Mark: There are conflicts. Due to the nature of Butch’s day gig as a producer of very famous artists, he can go on a Summer tour but that could mean early spring. His solo career is successful too, and people really come out to the shows. So the tours get booked around his production schedule. When Sara Watkins of Nickel Creek books a tour, she’s not saying to herself that before she does that, she needs to check with all the artists her drummer—me—and bass player play with, to see if we’re available. She has a career and she books tours and she finds people to play with her. I have to be really proactive and read the tea leaves and see what I have going on, and to check in without being a pest. That’s a skill. I want to ask Butch’s manager if he can tell me what Butch is doing in October. But I know he doesn’t know. And I just have to be okay with that. If I pester too much, like, “There’s this thing I want to do third week of June” or whatever, they might say that it sounds like I’m a little too busy to do this. So I have to be emotionally smart, because juggling fifty million things is a liability.

Mark: As a guy somewhere between someone who plays at the bowling alley on Saturdays and Matt Chamberlain, that’s what I have to do. That’s my life. Constantly scheduling and juggling. You have to be really organized and responsible. People skills, communication skills, organizational skills, logistics skills—they’re all really important. And letting people know you’re interested is key too. It’s the reverse of “out of sight, out of mind.” But the down-the-line stuff is tricky too. Someone could call you for a one-off in October. “Can you do it”? “Man, I don’t know!” [Laughs] There’s that musician code—which I think is antiquated—that goes, “It doesn’t matter if you booked a wedding and the Stones call for a tour, you have to honor your commitments.” The sentiment of that is true, and the spirit of that is true, and I appreciate that. But shit is way more complicated than that in real life. The music industry has shrunk, and [first-call studio drummer] Josh Freese has to work twice as hard as he did in the ’90s, and I have to work twice as hard as Josh Freese. I’ve learned that you just can’t go to every party.