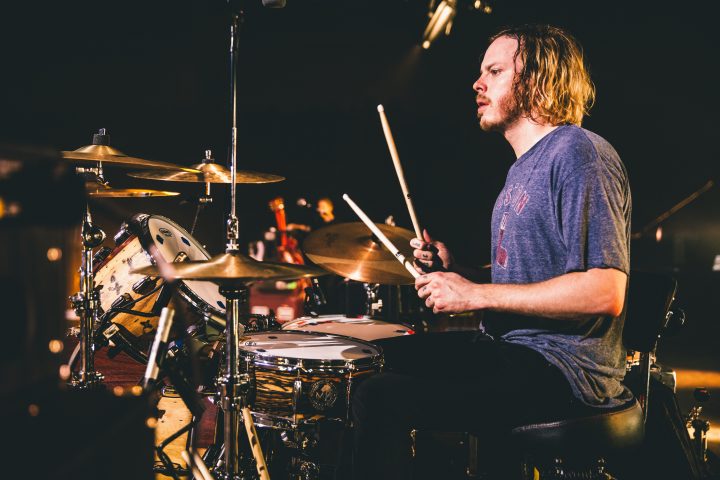 For ten years, Jared Champion’s backbeat-infused, no-frills grooves have propelled the alternative chart-crushers Cage the Elephant. The group’s current tour runs through August, with additional select dates in September and October. MD Online recently asked Champion about the band, his influences, and his live approach.

MD: How did Cage the Elephant form?

Jared: Matt [Shultz], Brad [Shultz], [Daniel] Tichenor, and I all went to the same high school. I was in marching band and started a cover band with Matt during my junior year where we covered Zeppelin and other classic-rock songs. Shortly after that, Matt, Brad, and I formed a band called Perfect Confusion, and we started writing our own songs. After six or seven years of performing regionally as Perfect Confusion—driving our gear around in my mom’s Blazer—our bass player and lead guitarist left the band. So when Tich and Lincoln [Parish] joined up with us, we wanted to start fresh with a new name and new music. That’s how CTE was formed.

MD: Who are your influences, and what about their playing drew you to them?

Jared: My favorite drummers are John Bonham, Mitch Mitchell, and Nick Mason. Bonham taught me to play with energy and really go for it at times. He was a breed of drummer that is really rare these days. He was a true rock star and brought a lot of attention to drummers. I feel like the persona of the superstar drummer has diminished over the years—guys like Bonham and Keith Moon. There are not as many superstar drummers as there used to be. With the expansion of technology in music, the need for drummers has been reduced.

I love Mitchell because of the funk he brought to rock. Any drummer that can keep up with Jimi Hendrix is amazing. And Nick Mason taught me to chill. I learned to play for the song from listening to Pink Floyd albums. Based on your phrasing, playing a simple 4/4 pattern can be more impactful than a busy, intricate phrase. He has an amazing feel.

MD: Do you incorporate ideas from your influences in any of the Cage the Elephant material?

Jared: I really go into writing open-minded. I always try to play what’s best for the song. I haven’t ever tried to mimic a specific groove for one of our songs—other than standard drum grooves that every drummer uses at some point, like a simple 4/4 or 3/4 groove that exists in almost every song ever. We have had a couple songs whose riffs were inspired by the drums initially, though. That usually happens when we’re jamming to write tracks for new albums.

Jared: No, I don’t play with a click live. I never have, and we don’t really ever record with a click. I keep time with my internal clock, and I’ll click [a rim] on stage to keep the other dudes together. I like the human feel and sway in songs. But sometimes my dudes can sway a little too much. So I click for them. [laughs]

MD: Do the songs change from the records to the live show?

Jared: I always try to play the parts live similar to how they are on the album. But after you play the same songs over and over for years, you start hearing little fills and things that you feel are better than the ones you initially recorded. At least for me it’s that way. So there are little things I’ll switch up live.

MD: Do you have any advice for bands who are trying to break into the music business?

Jared: Just practice constantly—every single day. If this is what you want, then engulf your entire being in to it. Don’t be a waiter that plays music and has a band. Be a musician that happens to wait tables until you can afford to support yourself playing music. You can’t half-ass this shit—it’s all or nothing.

MD: What’s the plan for the band after the current tour?

Jared: We only have two or three weeks between tours this year, so we all go and spend that time with family and friends. After this tour my plan is to spend time with my family. My girlfriend, Alicia, and I had our daughter Rozalyn fifteen months ago, so seeing them is always my main priority initially after any tour.

MD: Do you have any other projects you’re working on outside of Cage the Elephant?

Jared: I write on the side—mostly compositional instrumental pieces or hip-hop. I wrote an instrumental composition for my daughter. Over the holidays I scored a short film that’s currently in the Nashville Film Festival. I really liked doing that and feel that I’m pretty good at it. I’d like to do that a lot more in the future.

I’m a big fan of hip-hop and the blues. I produce hip-hop tracks for fun. I’m also working on a blues album with some friends. It’s inspired by Lightnin’ Hopkins, Blind Lemon Jefferson, and other artists from that era of blues. Amazing music.

Jared: For the longest time I always used what my dad used. So I use Zildjian cymbals, Promark sticks, and Evans drumheads. My dad was a drummer, and his dad was drummer, so it’s been passed down through the generations. I actually have my grandfather’s original Leedy kit. It’s very old.

I use Masters of Maple drums, an amazing company started by Sahir Hanif in his parents’ garage. That aspect really drew me to them because it’s similar to how we started our band. The new kit he just made for me is made from Brazilian rosewood with a glass finish. It’s an endangered species, making the set even more of a rarity. It’s illegal to log now. I have one of eight kits in existence. I use a 9×12 tom, a 16×16 floor tom, a 16×22 bass drum, and a 5.5×14 solid maple snare.