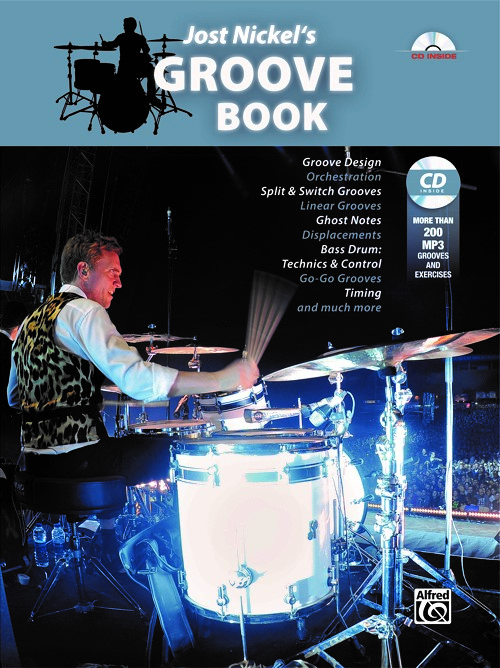 Jost Nickel’s Groove Book explores the meaning of groove, both in terms of what is played and how it’s played. Each chapter presents a new concept, such as linear grooves or ghost notes, and with it a set of rules for constructing patterns. Plenty of examples accompany each concept, so students should feel prepared to come up with their own phrases after finishing a chapter. The majority of the book deals with straight 8th and 16th-note figures, however the ideas can be applied to triplet-based patterns or shuffles. Long text passages are spared for more exercises, and explanations remain clear when needed. The book includes an mp3 CD with over 200 of the book’s grooves.

For the most part, chapters are independent of each other, and students can dive into whichever idea they want to explore. An orchestration section introduces two concepts, splitting and shifting, that are used to create variations. Two sections devoted to building grooves include a set of rules for constructing phrases (e.g., “Rule 1: The right hand begins on the first beat”). Linear grooves, ghost notes, beat displacement, and go-go grooves are covered, each with a separate set of guidelines for creating patterns while using the discussed concept.

Some chapters feel misplaced. Nickel’s philosophies on groove and timing are found at the end of the book, and a student would benefit from reading his ideas before practicing the preceding material. Likewise, bass drum technique is covered in the middle of the book, rather than upfront where a student could internalize the motions before moving on. However, this placement doesn’t detract from how thoroughly each concept is covered, and drummers looking for a fresh perspective on groove should check out this book. (Alfred)