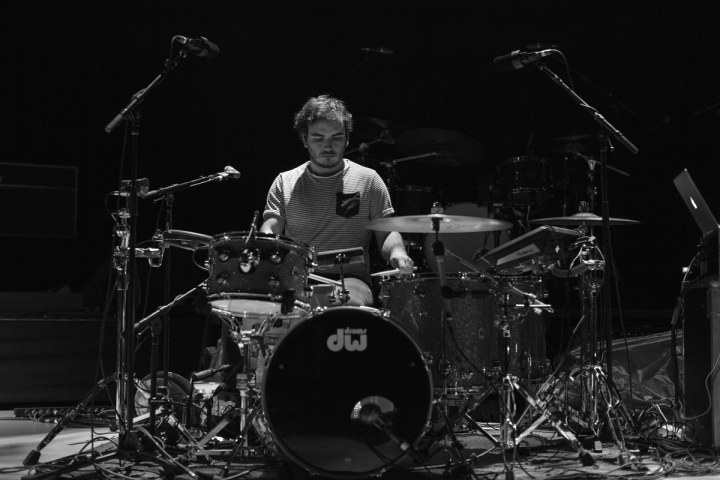 Remi Aguilella’s distinctive, stripped-down, and tasty phrases pepper the dark, moody dream pop of Daughter’s sophomore effort, Not to Disappear. “When we started, the music was a lot more acoustic, and the two other musicians in the band were both playing guitars,” Aguilella recently told Modern Drummer. “It didn’t feel right to add more high-end frequencies to the mix, and instead I decided to approach the drums more like timpani. I mainly played with mallets and brushes, and I decided I wouldn’t add a hi-hat to my setup, in order to think about the parts differently.”

Aguilella builds and breaks down grooves throughout the album to match its broad dynamic range. “I feel like we take drum parts for granted a lot of the time,” he says, “and that we want to hear a combination of cymbals, snare, and kick at all times. But by bringing one of those three elements in halfway through a verse, I think you’re able to lift that section, or at least bring it somewhere else.”

Not to Disappear came out this January, and we got a chance to shoot Aguilella some questions as he was getting ready for a tour-filled 2016.

MD: When did you join Daughter? How did you all meet?

Remi: I grew up in France and moved to London to study drumming in university, and Elena [Tonra] and Igor [Haefeli], the other two members of the band, were studying in the same school, working on songwriting diplomas. One of their classes involved playing their songs with a bass player and a drummer. I was the only drummer asked to do the class, so I ended up playing for twenty-four different songwriters. It was a fun experience, as some of them came with a very specific part in mind, some came with a rough score, and some had no idea what they wanted. So I had to kind of improvise based on some reference songs I had asked them to give me.

MD: What’s your music education background? Do you have any classical training?

Remi: I started taking drum lessons when I was seven years old. I had a fantastic teacher who was a really big Steve Gadd fan and introduced me from a very early age to jazz and Latin music. I was also studying classical percussion, so I was mainly involved in orchestras and jazz bands until I was fifteen years old, when a couple friends and I decided to start a rock/experimental band.

MD: In some cases with the Daughter records, it seems like floor tom patterns replace grooves that another drummer might play on a ride cymbal or hi-hat and snare. Where’d you get the inspiration for this, and what’s the concept behind it?

Remi: When we started, the music was a lot more acoustic, and the two other musicians in the band were both playing guitars. It didn’t feel right to add more high-end frequencies to the mix, and instead I decided to approach the drums more like timpani. I mainly played with mallets and brushes, and I decided I wouldn’t add a hi-hat to my setup, in order to think about the parts differently. I have added a lot of elements to my setup since, but the hi-hat is the one thing I’ve still left out.

MD: On Not to Disappear, it sounds like there are some loops or electronic patterns happening. When you were recording, did you play these live, or program them?

Remi: I programmed most of the electronics patterns before going in the studio, and on a song like “Numbers,” I decided to double it up with live drums to add some fills here and there and give it more of a “live” feel while retaining the drum-machine atmosphere.

MD: How would you handle those parts live? Do you play them on a sampler, or use a click with loops?

Remi: I use an SPD-SX live with four external triggers—three hand triggers and one foot trigger—attached to it, all located around the kit. So I’m able to play a lot of the single hits pretty easily. Also, seeing as I don’t use a hi-hat, I have one foot that’s free to do a lot of triggering.

MD: If you play with a click live, are there any challenges that come with that?

Remi: A lot of the newer songs are played to a click, and we have another musician helping us play a lot of the extra guitar, bass, and synth parts, and also occasionally some drum loops. But most of the time I’ll be playing live drums and trigger a couple electronic elements on top of that. The main challenge would probably be to retain a live feel and not make it sound too regimented.

MD: On the song “How,” your hi-hat part comes in halfway through the verse. In “Youth” off of If You Leave, in the verse you play a driving floor tom rhythm first every four bars, then every two, and finally every bar. Both sound like unique approaches for propelling the verses forward. Were these parts conscious choices? Can you explain this method of writing drum parts?

Remi: That’s very interesting, I have never thought about it, to be perfectly honest. I tend to bounce off of ideas or sounds that the other instruments or vocals bring. I mean, I feel like we take drum parts for granted a lot of the time and that we want to hear a combination of cymbals, snare, and kick at all times. But by bringing one of those three elements in halfway through a verse, I think you’re able to lift that section, or at least bring it somewhere else.

MD: On “No Care,” it sounds like there are multiple patterns going on at the same time. How are you handling this live?

Remi: This is actually one of the songs that we haven’t arranged for our live show yet, and to be perfectly honest I have no idea how I’m going to do it.

That was the very last drum part I recorded in the studio. I was about to pack up my drums to make some space for the guitar amps in the live room when we decided to give this song a go. I asked our producer, Nicolas Vernhes, to turn the click on, and for thirty minutes I came up with as many loops as I could think of.

MD: Can you talk about your approach to drum sounds? In some videos of Daughter live, it looked like you’re using a splash cymbal on top of a snare drum. In other cases, it looked like there was a towel covering the snare. Is there any specific inspiration for these sounds?

Remi: A lot of it came out of experimenting with sounds. When I moved to London, I bought an SJC kit that I really liked, but I was still missing a hi-hat stand. I ended up placing 10″ and 12″ splashes on my rack tom and using that as a trashy hi-hat. I eventually lost the rack tom, so I just transferred the splashes onto the snare.

I like to have a pretty good sonic balance with my drums, and while playing with mallets, hitting the splashes on the snare would be a lot louder than the rest of the drums. So I started putting a cardigan on top of the snare to mute it slightly. But even as a kid, I would always be buying all sorts of sticks, cymbals, and accessories to experiment with sounds. Remember the Johnny Rabb sticks and brushes? I was of those guys who bought them and had a lot of fun with them.

Remi: It’s very much a per-song process. It used to be songs written by Elena that we would try to arrange all together, but now it really varies. In general, though, a rough melody or guitar part will have been written, and then I’ll come in and try to come up with something that suits the song while trying not to get in the way of the lyrics and melody.

MD: Can you talk about your approach to sampling? Where do you get your sounds? Do you program them yourself?

Remi: Most samples are made using multiple layers of electronic sounds and live sounds that I would have recorded and chopped up. I program them myself, and actually it used to be part of my method to visualize drum parts that I had in my head. We didn’t have a rehearsal space in London, and so on our first album, If You Leave, a lot of the drum parts ended up being the live interpretation of the programmed parts I had come up with.

MD: What types of programs do you sample with?

Remi: On stage I use the Roland SPD-SX with the four external triggers. At home, and when writing the parts, I use Logic Pro. I can program parts really quickly on Logic, and as a result, I know that I won’t lose my ideas while trying to sample them. I also really like the Akai MPC series, but it’s pretty difficult to travel with a bunch of hardware, so that’s why I think I ended up using Logic so much.

MD: When writing, do you have specific ideas for sounds before sampling or adding electronic sounds to your kit, or do you feel it out as the songs develop?

Remi: I tend to start with an acoustic idea in mind. Then as the song develops, I’ll see if it’s worth bringing some electronic elements in. But again, some songs are different. I might have programmed a part to visualize it, and when playing it live, realize that I want one of the electronic elements brought back in.

MD: What was it like playing the Late Show with David Letterman at such an early point in your career?

Remi: Pretty crazy. We only had two EPs out, and for us, simply touring the U.S. was something we never expected. So to be asked to play David Letterman was just surreal.

MD: Do you have any other projects you’re involved with?

Remi: Not at the moment. A couple friends who are also in touring bands and I have been talking about maybe doing something together for fun, but finding a time when all of us can be in the same city for more than a couple days has turned out to be virtually impossible. In the past, a few people have asked me to play drums on their records, but it never works out from a scheduling point of view. But it’s something that would really interest me. I think it’s always beneficial creatively to get out of your comfort zone, and to not do the same thing over and over again because it’s easier.

I have a slight obsession with programmed drums or beats in hip-hop, and I tend to program a lot on my computer whenever I have some downtime. So maybe I’ll see if somebody wants them.

MD: What does the future hold for Daughter?

Remi: A lot of touring. Hopefully we’ll go back to some of the places that we went to on our previous tours and get to go to new places. Our album just came out this month, and our schedule will probably be pretty full for the rest of the year. Right now we’re still figuring out how to play some of the songs live.

In terms of electronics, I have the Roland SPD-SX with four external triggers connected to it [a PD-8, a KD-7, and two BT-1s]. I’m also really excited to try one of the Sensory Percussion acoustic triggers by Sunhouse. I think that’s something that will revolutionize the way a lot of drummers, including myself, approach electronics live and in the studio.