The Legends Series Awards will kick off the WFD World Finals at 2 pm on Saturday, July 11, as a featured attraction of the Summer NAMM Show held at the Music City Center in Nashville, TN. The event is open to the public with a day ticket as part of NAMM’s Industry Day. Radio and TV celebrity host Charlie Chase, a drummer himself, will present the awards.

“If it were not for these three drummers doing what they love to do back in the day, we, at WFD, could not do all the crazy stuff we are doing today,” says Boo McAfee, creator of WFD events. “Heck, without these guys, rock ’n’ roll, country, and outlaw music would not be what it is today.”

D.J. Fontana was inducted into the Rock and Roll Hall of Fame in April 2009. Fontana was hired in 1955 as Elvis Presley’s drummer, expanding the group to a four-piece, and remained with Presley throughout the fifties. During the sixties, when Presley turned his attention to movie making, Fontana was still present at many of his Nashville recording sessions. 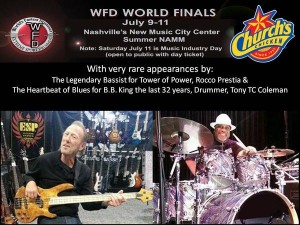 Celebrity host Charlie Chase was inducted into the Country Radio Hall of Fame along with his co-host, Lorianne Crook. Crook & Chase can be seen in more than 130 cities across the US, and the duo continues to host their long-running radio program, The Crook and Chase Countdown.