British national treasure Paul Weller—front man of seminal mod-punkers the Jam and soul-infused new wavers the Style Council—is well into his fourth decade of making vital rock ’n’ roll records. And though he may be considered an elder statesman at this stage of his career, he continues to defiantly reject the shiftlessness associated with such a stuffy title. Looking lean, mean, and as impeccably hip as he did when he burst onto the London scene in the late ’70s, the Modfather celebrates his fifty-seventh birthday with the release of Saturn’s Pattern, his most sonically ambitious effort to date.

Blessed with skilled timekeepers throughout his storied career, Weller tapped thirty-three-year-old Ben Gordelier to slap the skins on his twelfth solo album. The fresh-faced talent boasts a knack for composing cleverly deconstructed rhythms that mesh perfectly with the vision and onslaught of textures conjured by Weller and producer Stan Kybert. From the spacious, Bonzo-esque stomp of the title cut and album opener “White Sky” to the Beatles-y bounce of “Going My Way,” Gordelier impresses with his solid pocket and understated creativity.

If you catch Weller on the road this year, however, it’ll be dynamic powerhouse Steve Pilgrim dishing out the beats, with Gordelier in tow to sprinkle in additional percussion, samples, and the occasional double kit jam. Pilgrim, a thirty-six-year-old Liverpool native, is Weller’s longtime live drummer of choice, in addition to being a key contributor his 2010 album, Wake Up the Nation, and 2012’s Sonik Kicks.

We gave a ring across the pond to get the skinny on how this dynamic drum duo sussed out their respective roles with Weller, and if we can look forward to any onstage drum duels on the Saturn’s Pattern tour, which hits the U.S. East Coast and Midwest June 9–20 and the West Coast September 29–October 8, with a European run in between.

MD: How long have you guys been playing with Weller, and how did you get the gig?

Ben: I’ve been doing it for three years now. When Paul toured on Sonik Kicks, he needed someone to trigger some samples—sound effects and things like that. There’s a lot of random sounds on that album, so I ended up playing some additional percussion as well. I play drums in a band called the Moons, and our singer, Andy Crofts, has played keyboards for Paul for eight or nine years. So when Paul needed someone, Andy put my name forward.

Steve: I’ve been playing with Paul for about seven years. I was with a group called the Stands that had some success in the U.K., and we did some touring with Paul in the mid-2000s. When Steve White parted ways with Paul, I got a call from Stan Kybert, who produced Paul’s last few records. I came down to London for what I thought was an audition, and it turned out there was no other drummers there! [laughs] So we ran through a couple of songs and Paul was like, “What are you doing on Saturday”? Next thing you know, I was playing at the Roundhouse in London that weekend.

MD: The last few Weller records have featured a handful of different drummers, including both of you guys. But Ben, you’re the only drummer on Saturn’s Pattern. Why did he choose to go this route?

Ben: I don’t know if Paul thinks too much into things like that. I was at his studio [in Weller’s hometown of Woking, southeast of London] just sort of hanging out already, and if someone’s nearby, he’ll get them to play. I’d recently tracked drums on a song called “Brand New Toy” [a new track on Weller’s 2014 best-of compilation, More Modern Classics] on which we both had a similar idea for a rather backwards drum beat in the verses. That worked really well, so I think we were on a similar wavelength.

MD: Speaking of, the beats on Saturn’s Pattern feel deconstructed at times. There are lots of interesting textures, and the drum tones are constantly changing from song to song.

Ben: Yeah, that’s kind of my style, rather than just playing the standard “snare on the 2 and 4” sort of thing. Paul’s really getting into Pro Tools and that way of recording, so I think he’s just trying to mix it up a bit, keep it fresh. I think that’s another reason he was keen on me, because I have an engineering background. On each track I’d tune the kit differently or use different pieces. Some of the tracks are two or three parts put together, so I might have just recorded the kick and the snare on their own, and then added the toms and cymbals separately. I did some post-production as well, chopping things up, moving them around, EQ-ing the kit, and adding things like reverbs and delays.

MD: What kind of gear did you use?

Ben: I used a lot of different Natal drums. Paul Marshall at Natal has been really good to me, and sets me up with kits wherever I go. Paul [Weller] has got an old Premier Genista set that I really like. I’ve got one myself, so I know how to tune it up really well. There were some Ludwig and Pearl snares in the mix. We just went with whatever sounded right for the song we were recording at the time.

MD: Are there any tracks that you’re especially fond of drum-wise?

Ben: I really like “White Sky.” There’s a lot of big tom sounds in there, and I love the handclaps on top of the backbeat. “Where I Should Be” is probably my favorite. Stan Kybert had a programmed beat that I sort of replicated on that one. Another favorite is “Going My Way.” I tuned the floor tom really low to get sort of a kettle drum sound, and I played it with mallets.

MD: Steve, you have to play parts recorded by a number of great drummers, from Rick Buckler of the Jam to Steve White and now Ben. How do you approach playing other drummers’ parts while still maintaining your own style?

Steve: I try to give as much respect as possible to the original parts wherever I can, but of course, the way that you hit the drum is the way that you hit the drum, so it’s always going to sound a bit like me. A big part of it is getting in the room with the other musicians and figuring out what our live interpretation of the song will be. It’s not necessarily going to be a carbon copy of the recording—it’s going to be whatever works with that particular set of players.

MD: Do you enjoy playing with a percussionist?

Steve: Oh yeah, it’s amazing! Ben’s added a whole new dimension to the band. It was a bit intimidating at first, having another drummer on stage. But the way we work together is really interesting and really exciting—it gets the audience going. You don’t see two drummers on stage very often. We’re not exactly doing, like, a full-on drum-off or anything. [laughs] But there are parts where we groove together and there’s a little bit of soloing going on and stuff that’s quite fun.

MD: Ben, is it strange being on stage but not playing the drums on the songs you’ve recorded?

Ben: Not at all! We’ve got two drumkits, so I’ll join in with Steve on a few songs here and there. Like on “Brand New Toy,” I’ll play the verses and he’ll play the choruses. And I’ve just got a Roland SPD-SX pad for the upcoming tour loaded with Moog sounds and vocal effects and all kinds of digital percussion—it’s been a blast to play with. Plus, Steve and I just work so well together. I’ve got the best of both worlds, really.

For more on Ben Gordelier, go to bengordelier.com, and for more on Steve Pilgrim, head to stevepilgrim.co.uk.

On the Beat With Chris Reeve of Filter: Connecting and Creating Relationships 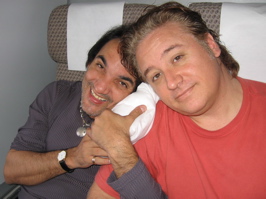