Sweetwater, a top online retailer of music instruments and audio equipment in the US, is presenting GearFest 2015 on Friday, June 12, from 9 am to 6 pm, and Saturday, June 13, from 9 am to 5 pm, at the Sweetwater campus located at 5501 US Hwy 30 W in Fort Wayne, Indiana. GearFest is free and open to the public.

GearFest combines a gear expo, entertainment events, a flea market, and musical demonstrations, plus seminars and workshops conducted by some of the biggest names in the music industry. GearFest also offers two days of great deals on instruments and pro audio gear.

Sweetwater founder and president, Chuck Surack, says, “GearFest has become an extraordinary one-of-a-kind event in the music retail business. Where else can musicians and music-lovers come to see, hear, enjoy, not to mention buy, what is usually reserved for music industry insiders at your typical trade show? We’re also particularly proud to be able to produce this huge event in Fort Wayne, bringing people here from all across the country.” 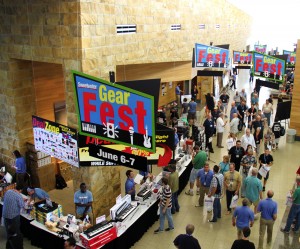 More than 400 product lines, including all of the newest musical instruments, music technology, and audio equipment, will be on display in nineteen tents and four semi-trailers. In addition, Sweetwater will offer once-in-a-lifetime sale pricing on many products.

GearFest ’15 will also offer five Pre-GearFest Amplified Workshops, on Thursday, June 11, from 8 am to 5 pm. These workshops, which cost $79, include “The Craft of Songwriting,” “Shaping the Sound of Worship,” “Pursuing the Ultimate Guitar Sound,” “The Art of Studio Mixing,” and “Synth Tips and Tricks.” Space is limited. For more details and to register, go to www.sweetwater.com/gearfest/amplified/.

Attendees can bring a guitar for a free restringing and setup, enjoy great food, and experience the newly expanded Sweetwater campus, including the new Crescendo Café, featuring coffee, ice cream, and other sweets.

A musicians’ flea market, where used equipment can be bought, sold, or traded, is open to all. To pre-register to participate in the flea market, call (260) 432-8176.

The entire GearFest 2015 schedule of events is available online at www.sweetwater.com/gearfest/schedule/.

To speed up the registration process at the festival, you can pre-register online at www.sweetwater.com/gearfest/register/.

Out-of-town guests are encouraged to book hotel accommodations as early as possible. Travel and hotel information for Fort Wayne, IN, is available at www.sweetwater.com/gearfest/hotels/.