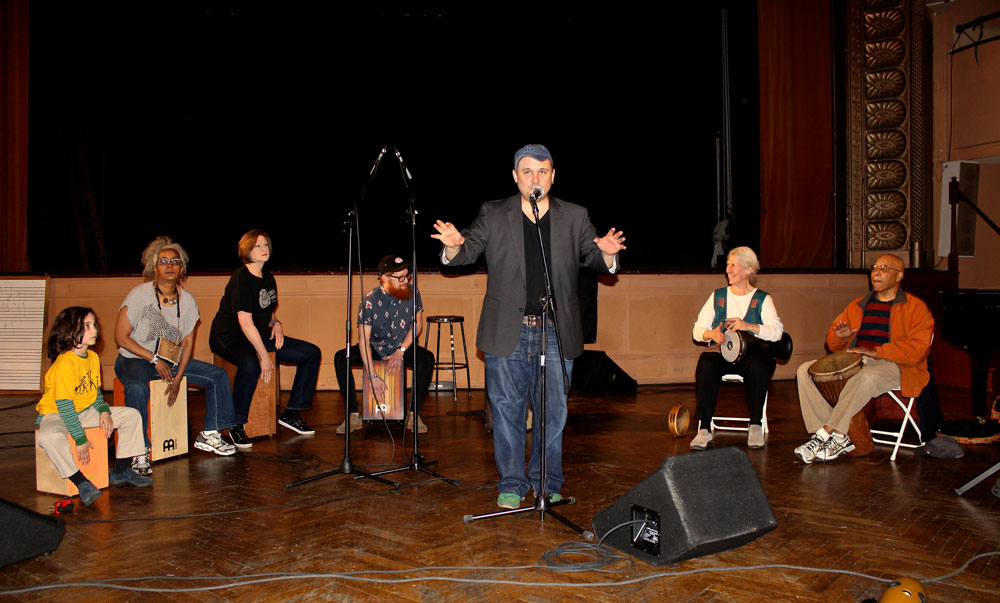 The 2nd-Annual Philadelphia Hand Drumming Festival was held this past April 11 on the campus of the University of the Arts, which is located in the heart of downtown Philadelphia. The festival’s creator, Grammy award–winning percussionist and University of the Arts faculty member, Arturo Stable, developed the festival to showcase the city’s rich drumming traditions. “When I teach music, I don’t talk too much,” says Stable. “I try to inspire by playing and hope that is enough inspiration. Music and drumming is a wonderful thing that helps us in many ways in our lives.”

This year the festival’s home was the University of the Arts’ Gershman Hall on the Avenue of the Arts. The event ran all day, providing a plethora of events that showcased a multitude of percussive styles, including those of Cuban, African, and Arabic origins. In addition, master classes, an audience discussion, performances, and a dance party put on by Philadelphia’s Ill Doots, and a Cuban ensemble paying tribute to the Buena Vista Social Club filled out the day.

The festival participants were given the opportunity to learn from master percussionists Hafez Kotain, Pablo Batista, Lenny Seidman, and Stable. The festival was also streamed live to reach additional viewers. The demographic of those in attendance included a wide spectrum of participants, from six-year-old aspiring drummers to college students and more seasoned players.

A drum circle, which was led by Stable and endorsed by Meinl Percussion, was perhaps the most heartwarming portion of the event. Anyone with a drum of any sort was encouraged to come on stage and participate in an instructional jam session. The room was all smiles and everyone walked away having learned something. “The students that came were exposed to techniques and styles of music that they do not often see and information that is not normally handy in Philadelphia, which definitely inspired them and helped with their growth as musicians,” says Stable.

Pablo Batista, renowned AMLA teacher and PEW Fellowship Award recipient who got his start playing with Grover Washington, was a speaker on the hand drum panel that took place. Batista wisely emphasized, “You have to know the rules before you can break them. It’s not about mimicking; it’s about studying.”

Stable concludes, “It’s important to involve the community. We did not become musicians to make money. We became musicians because it is a call from our DNA. It’s important to use our gifts for good causes. Playing for a bunch of kids and inspiring them encourages the possibility of a better, more complete, and harmonious living.”