Greetings drummers of the modern age! We are Salvador Placencia and Garrett Ray, percussionist and drummer for the band Fool’s Gold from Los Angeles. We thought it would be fun to interview each other to give you a little insight on who we are and what we’ve been up to while we’re rehearsing hard for our upcoming European tour and the release of our new album, Flying Lessons.

Garrett: Salvador! Good to see you, and I don’t get to do it often enough!

Sal: How you doing, my homeboy, Garrett. We going to talk some drums?

Garrett: Yes, sir. I guess first thing would be good to talk about how we got started and some influences. Who are some of your biggest influences?

Sal: Early on, we got a chance to play with Tinariwen out of Mali and their percussionist Said Ag Ayad is someone that I’d gotten to know a little bit and has been a huge influence. I straight-up love watching him play. Probably a lot of drummers, not just percussionists, such as Stephen Perkins, Tony Allen, and right now anything coming out of Mali or Morocco, as well as the drummers/percussionists from the Moroccan band Oudaden. Also, I’ve been listening to a lot of music with calabash, a half-gourd drum played mostly in the Western Saharan region and playing it myself.

As far as African music in context with Fool’s Gold, what I brought to the table probably stems more from second-line music out of New Orleans. Since then, I’ve learned more about rhythms originating in Africa and how closely they are relatives. You don’t have to look far to see the evolution. I started playing when I was around eleven or twelve. My father was always busy playing when I was a kid and so I was always kind of resistant to trying to do it (laughs), but when friends at school started getting girlfriends my brilliant plan was to ask him to teach me, because musicians get all the girls, right? So I stuck with playing, mostly to records and just copying what I heard. I got in my first band when I was thirteen and I’ve been playing pretty much ever since. When did you first start getting into playing percussion?

Sal: I started playing when I was about twenty years old, so kind of late. I got started taking hand drums to raves, just playing along with the rhythms for hours on end, and then going to drum circles. Then I slowly got away from that and wanted to learn more about what I specifically liked in a lot of these rhythms I was hearing. It was mostly music from Africa that I seemed to focus on and their regions. I did that but also left music for about ten years and pursued an art career. While I was at UCLA studying, an old friend, Orpheo McCord, who now is a drummer/percussionist with Edward Sharpe and the Magnetic Zeros, approached me. He invited me to a get-together to play with his buddies and what would become Fool’s Gold.

Here we are eight years later and getting to release our third full-length record. It’s exciting. I can’t wait to play some of this new music for people.

Garrett: Yeah, I am, too. I think this our best record yet—also our best sounding record, too. I’m really happy ORG records is putting it out and supporting us. How awesome is it to finally have the record in hand to see the artwork?

Sal: It was pretty interesting the way it all went down. We were in the studio recording the album and just decided to start drawing these crazy characters on a big poster in the control room in between takes. Everybody had a contribution. Everything is kind of representing the band and it’s history in one-way or another.

Garrett: Everybody except me I think! (laughs)

Sal: (laughs) But that ended up being the album cover. At least a sort of collage of what we made. And then the same cutouts are what were used in the video for the first single, “I’m In Love,” by Sally Tran.

Garrett: Best video. Ever. What’s your current percussion set-up like?

Sal: It’s pretty simple but it’s unique. Two congas, bongos, I play an African brékete which is sort of a compact bass drum with a single “snare” string that has an interesting buzz to it. Bells and wood blocks, and then an SPDS pad that I trigger all while I’m playing my parts. What I trigger is mostly composed of keyboard pads and other instrument parts. In the beginning Fool’s Gold was a fifteen-piece band and now we’re a four-piece, so, I’m playing a lot of those missing parts while I’m playing my own.

Garrett: And you forgot about your signature component, the Loco Foot!

Sal: Yeah, the Loco Foot was an interesting invention that came out of that large band environment where we had at one time, three or four other percussionists mostly playing the same rhythms; maybe just the downbeats but each playing an instrument with a different sound quality. So, the Loco Foot consists of a remote hi-hat with different pieces attached, a tambourine, African goat toes, shells, etc., and it changes often. Just a bunch of different sounds that I can play with my foot and has the effect of a lot of people clapping or playing at the same time.

Garrett: As far as my set-up, I’ve got a vintage ’70s Rogers kit that I’ve had for years and I’ve played on a bunch of records with. It’s beat up but sounds really great. Typical rock sizes 12″, 13″, 16″, and 22″. Cymbals for me are like clothes but I always seem to gravitate towards darker cymbals.

I’ve started to make drums again, too. When I was around twenty it was just something I wanted to try. I’ve made a few snare drums and a few drumkits that I’d gigged with for a long time. I started making them again recently and really enjoying playing with different shell configurations and edge profiles. I’ve got seven or eight snare drums I’ve made for sessions and also a small drumkit I intended to use for home practice but have been playing out with it and loving it. It’s a 7×12, 12×14, and 13×18 bass drum. Lewis, our guitarist, wants me to go public with the “company,” and he’s given me the name for it—Rayco.

Thanks to Modern Drummer for giving us the opportunity to share what we’re doing. Flying Lessons will be out on ORG Music May 19.

For more on Fool’s Gold, visit foolsgoldla.com and check out the official video for “I’m in Love” below. 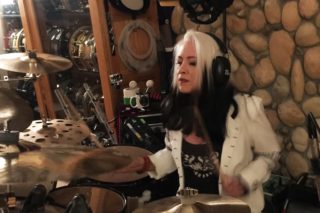 Ryan “Legs??? Leger of Every Time I Die