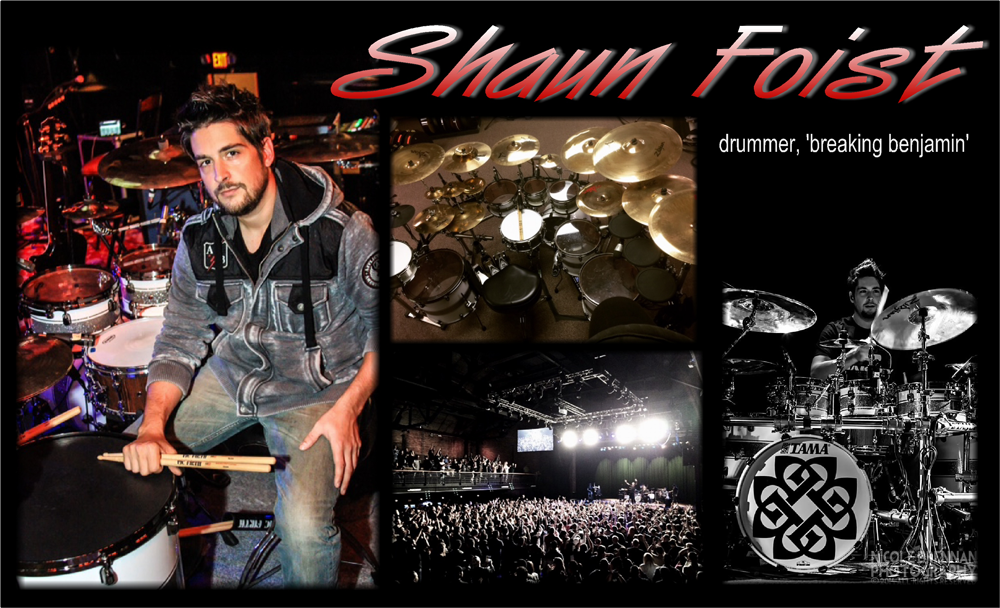 In 2012, producer David Bendeth was working on an EP for the California band Picture Me Broken. I happened to be working in his studio at the same time. After seeing me play, the band hired me for the session and after that, I was invited to join the band. In 2013, we toured with OTEP, One Eyed Doll, did a music video, and opened for the Alice Cooper/Marilyn Manson “Masters of Madness” summer tour. Being on the same billing with two of rock’s biggest icons was incredible, and it was a great experience working with them and their teams.

An interesting thing happened on the way to the Cooper/Manson tour; before it kicked off, I was offered the drummer slot with the band Breaking Benjamin. For anyone who’s followed my career, it’s no secret how much this band has inspired me and my style of playing. Benjamin Burnley, the founder and leader of BB, was rebuilding BB’s lineup and had seen my work on YouTube. After mutual friends exchanged our phone numbers, Ben called and asked me to send him a couple of videos playing to BB songs. I got in touch with my manager, Loni Reeder, asking her to hook me up with a studio as soon as possible so that I could set up my kit and get those videos done. I didn’t tell her why, as I didn’t want to jinx anything. And by the way, those videos, “Natural Life” and “Diary of Jane,” are up on my YouTube page if you want to check them out.

Soon after Ben asked me to come to Pennsylvania to meet and see if we jived in person (which we did), and then he offered me the slot before the Cooper/Manson tour started. The news was kept quiet, and only my family and manager were told. I left PMB after the final Cooper/Manson performance in July 2013 and began to “silently” work with BB until the band made its lineup announcement in August 2014.

We played our first shows (unplugged) in October 2014 to sold-out clubs in the northeast. The reception we’ve received has been overwhelming and humbling. We’ve been in rehearsal since the New Year, with touring to begin as you’re reading this, and are booked for several festivals (Fort Rock, Rockville, Rock on the Range, Carolina Rebellion, and Rocklahoma), with more dates to come. Upcoming shows will be posted on our Facebook pages and my web site.

I won’t say that the BB gig fell in my lap—because it didn’t—but I will say that all the hard work I’ve been putting in for over ten years helped to get me noticed. So for any drummers out there uploading your videos to YouTube, make sure it’s your best work, because you never know who might be watching!

Hope to see you out on the road!