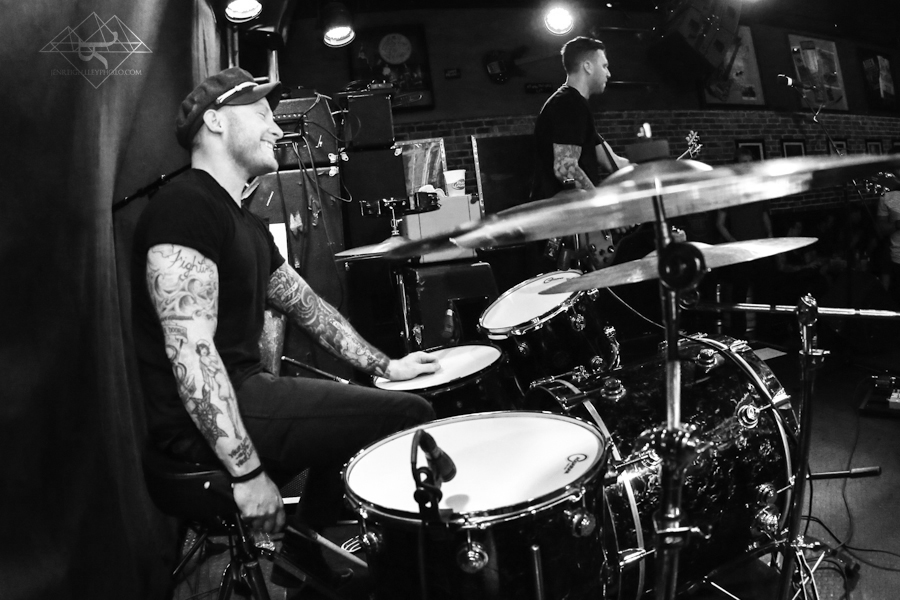 Modern Drummer has invited me to talk a bit about drumming and what has influenced me to keep playing for the past seventeen years. My relationship with the drumkit and all it represents is different than most drummers I know. For me, there is a before, and there is an after.

Before I was diagnosed with cancer, drums were nothing more than an excuse to join a band. I grew up with my twin bro, Nat, in a small West Virginia town. It was the ’90s, and it was such a killer time for music that even in Appalachia we managed to discover punk rock. Nat had the idea to start our own band. No one played any instruments, so we decided at random what to play. By the time he told me about the plan, drums were the only instrument left.

The first drummer who really stood out to me was Byron McMackin from Pennywise. Their song “Perfect People” was our FU anthem. Those drum parts…Jesus! I’d never heard anything played that fast or sound that pissed. The snare rolls blow through that song like machinegun fire. All the attitude and anger from the song’s lyrics came through in the drum part, and that’s what I wanted to do.

Luckily, playing in bands with my twin brother made it easy. No matter who we played with, Nat always sang and played guitar/bass, and I played drums. It made it easy for me to try to capture the essence of the song in my drumming because we were always working on some weird twin wavelength—I always knew what he was going for, even when he didn’t.

I discovered the Who in the ninth grade, making out with a girl while “The Seeker” played in the background. I bought the CD the next day, and Keith Moon blew my head open! I sat down in my parents’ basement for weeks trying to learn the second-verse fill on “Baba O’Riley.” I still can’t nail it.

I dug drummers who played the way a tasteful lead guitarist does—capturing the emotion of a song without hamming it up. Pete Parada of Face to Face, Stan Lynch from Tom Petty and the Heartbreakers, and Sean Sellers of Good Riddance had a big impact on me stylistically. It wasn’t as much the drums themselves that were as cool to me as creating music with a band.

Then, at seventeen, I got diagnosed with cancer. My world turned upside-down. I was too sick to play. The treatment left me with nerve damage in my hands, as well as chronic severe back pain. Worse yet, I had to get my entire right lung removed. I had no feeling in my hands and a forty-five-percent breathing capacity. No one ever expected me to play drums again, except my brother. Years later, after my treatment ended, Nat pushed me to pick back up right where the two of us had left off. It wasn’t encouragement as much as “just do it,” which was exactly what I needed. We started playing together again, slowly. Then we started writing songs. Finally, we started playing shows.

Playing drums means something entirely different to me now than it did before I got sick. Now, every time I hit those drums I know full well I shouldn’t be able to. Every time I can get on stage and play, no matter how hard it may be, all I want to do is beat the living shit out of them.

The thing that inspires me nowadays is the other people in my band. Backlist Royals is a band of second chances. Dirk, our bassist, is an Iraq war vet. He plays so hard he looks like he’s trying to choke his bass to death. I met Brad, our lead guitarist, slinging t-shirts for other bands on the road. Now, I sit behind my kit and watch him shred to hundreds of kids each night. And, of course, there’s my bro, up in the front of the stage, tuned to our own frequency like he’s always has been.

Playing music means something more to me, to all of us, than it did when we were young. In Blacklist Royals, if you aren’t inspired, you need to get off our stage!