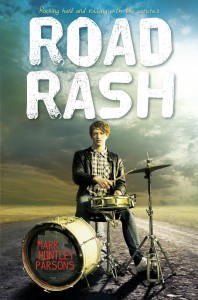 “How many drummers does it take to…”? “What do you get when you cross a drummer with…”? “Did you hear about the drummer who…”? Yes, I have. And so have you. And some of them are even funny. But underlying all those drummer jokes is an attitude (at least among the general public) that drummers are a little lower on the evolutionary ladder than “real” musicians.

When I first started writing the band-on-the-road novel that became Road Rash (Knopf/Random House), I debated for all of thirty seconds the idea of having the protagonist be a guitarist. Then I decided that no, even though I’d been trying to avoid taking the whole write-what-you-know thing too literally, Zach—the viewpoint character—was definitely going to be a drummer. And not a stereotypical lowbrow dude or a Spinal Tap-ish joke, either, but an actual living, breathing, flawed-but-striving human being. Maybe one who writes songs. Maybe one who sings. Maybe one who has insecurities. Maybe one who falls in love. Maybe one who plays another instrument besides the drums. Heck, maybe even one who has aspirations toward engineering or producing or…In other words, maybe someone just like you, or me, or a ton of other drummers out there in the real world, doing what they can to further their passion for drumming, for music, for life.

We know all this, and more, but the public really doesn’t, and most books and movies get it wrong, way wrong. So, I was stoked to be able to put the truth of what a drummer really is into a work of fiction, turning some of those tired old drummer jokes on their head in the process.

So yeah, it’s certainly satisfying to create your own world with your own characters, then set them up in interesting situations and see how they try to deal with it. (In other words, writing is a lot like music—so rewarding that you can’t believe you don’t have to pay to do it.)

But, beyond all of the above, Road Rash—my first published work of book-length fiction—is also very special to me because it allows me to give back to drumming a tiny smidge of everything it has given me. I’m truly overjoyed at having the opportunity to “give the drummer some!”