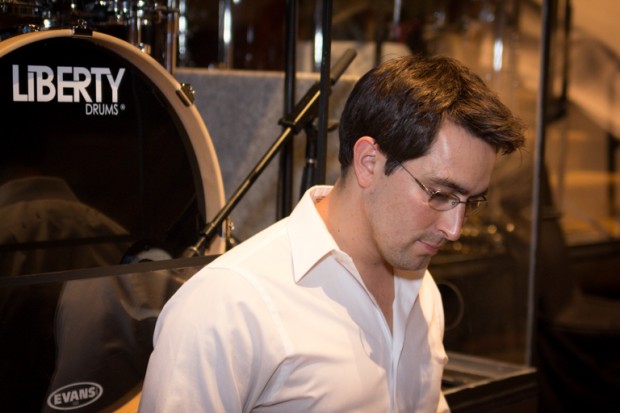 Hello, MD readers! I wanted to tell you all about an upcoming show that I have been privileged to work on, an amazing production called “The Really, Really Big Christmas Show,” put on by Second Baptist Church in Houston, TX. It is a variety show with tons of musical acts, aerial-acrobatic displays, and one crazy drum routine of which I have been honored to write, arrange, produce, and direct. 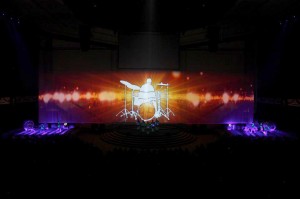 All of these elements combine to tell the story of Christmas. The drum number is presented at the climax of the show as we tip the hat to the well-known tale of the little drummer boy.

When the request was received to write the drum piece, I was asked to make the routine “really, really big.” It has thus morphed into something larger than ever expected and one that has been a pleasure to see grow beyond my initial comprehension. 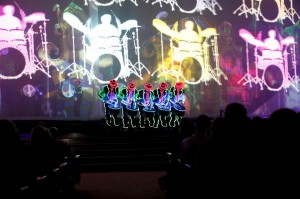 This year we will combine el-wire suits (like LED suits), glowing sticks, the latest HD technology projecting a 32′ drumkit player onto a 42′ screen, and a full snare line that takes center stage. Then we will branch out onto two side stages that feature drummers playing surdo drums combined with Rototoms, marching bass drums, and a big surprise that occurs midway through the number. 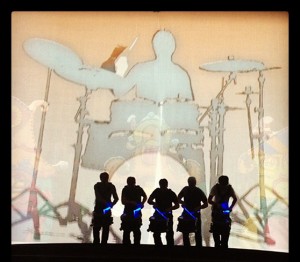 Starting with a battle between the drum line and kit drummer, we will begin to weave high-tech visuals while grooving some tricky 4/4 patterns at 120bpm that transition into a 12/8 drive that hits150bpm. Then we bring it back to a three-over-four section playing a crossover pattern between each drum.

It has been a blast writing a combined high-energy routine that mixes rudimental-style playing and visuals with a soloistic drumkit addition that also grooves. Bringing both styles together has had its challenges, but overall has been a fun creative process. The drummers assembled have been an outstanding team to work with, dedicating months of practice to this routine. And the most amazing part is that they volunteer their time. The age of the group ranges from fifteen to forty-five.

Last year we sold out all six shows, so this year we decided to add another. From December 19 to 22, we will have seven presentations. After the final act, all the drummers unite to say a grand goodbye. It is an enjoyable time that sets the mood for the season.

You can order tickets at www.second.org. I hope to see you there.

Many thanks to Modern Drummer, Ariel Experience, Mapex, Remo, and to you for reading!