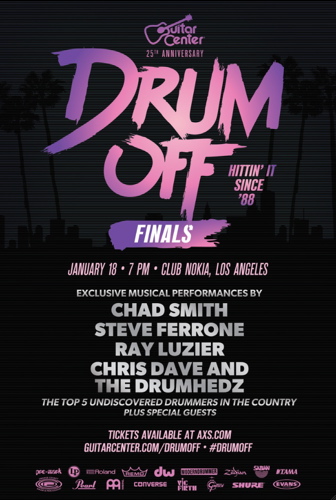 Tickets for the January 18 finals are available now.

Starting in August, drummers from across the country signed up to compete in Guitar Center’s 25th Annual Drum-Off. Five finalists have been selected to go on to battle it out for the title of Guitar Center’s Drum-Off Champion and a prize package valued at nearly $50,000. Past winners have gone on to play for the likes of Prince, Beyonce, Jay Z and more.

The five finalists were chosen from over 5,000 entrants nationwide and represent some of the nation’s greatest undiscovered drummers. In addition to the competitors, the night will feature exclusive musical performances by a host of renowned drummers and a special Rock Walk Induction honoring acclaimed drummer Steve Ferrone. Additional guest performers as well as a panel of celebrity judges soon to be announced.

Ticket are available now for $20 and can be purchased here.