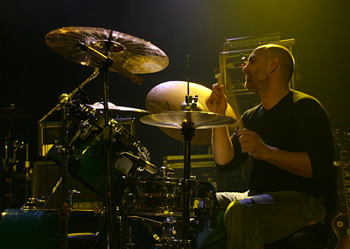 Primus is set to welcome the legendary drummer Tim “Herb” Alexander back into the band following the departure of Jay Lane. Bassist/singer Les Claypool, guitarist Larry LaLonde, and Alexander plant to head into the studio this November to begin work on the follow up to 2011’s Green Naugahyde. Alexander will be returning to play New Year’s Eve at the Fox Theater in Oakland. Expect to see more dates to follow in 2014. Alexander last performed with Primus at the Outside Lands Music Festival in San Francisco on August 23, 2008.

You can find more information in this Rolling Stone interview with Claypool.  The bassist has been busy this fall, as he just finished up work on a Duo de Twang album for release sometime in early 2014 on ATO Records. Additionally, he’ll head out on tour with the Duo de Twang in October. Claypool will also perform with Tom Waits at Neil Young’s Bridge School Benefit at Shoreline Amphitheater in Mountain View, CA.