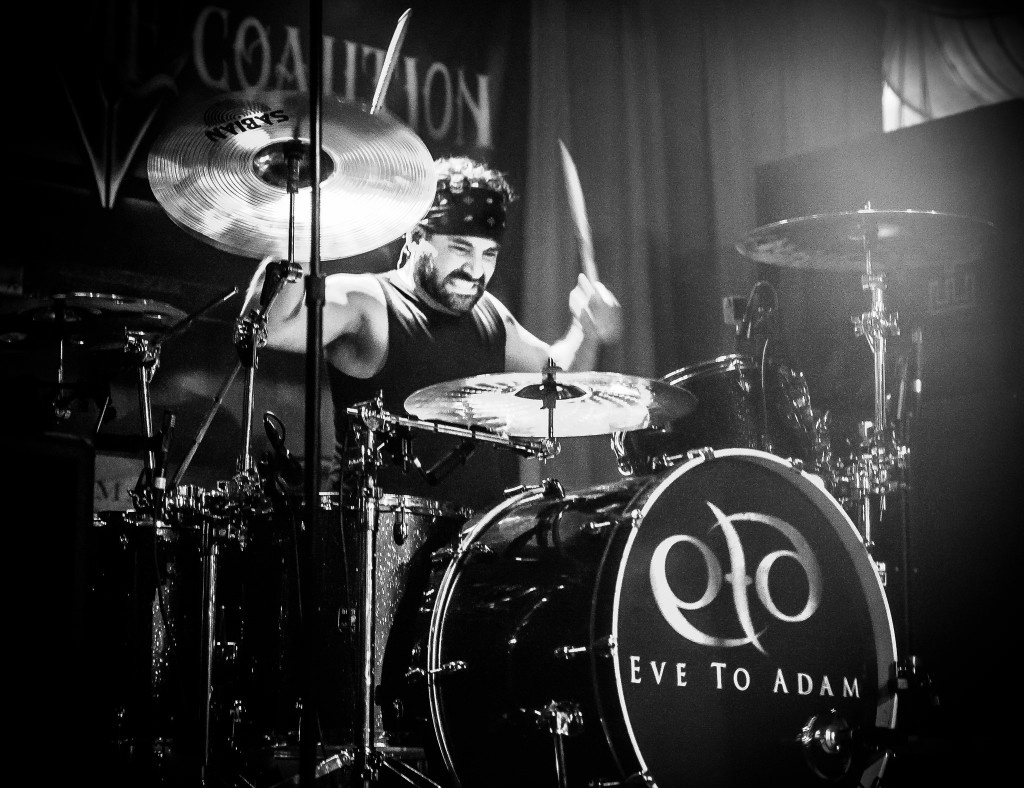 Hey all you drum loving maniacs! I’m Alex Sassaris from the NYC rock band Eve to Adam. We are gearing up for the release of our fourth studio album, Locked and Loaded, which comes out September 17 through our label 3 for 5 Records/MRI/Sony RED. Be sure to keep an eye on our website and Facebook page to see us unleash a full-fledged assault of powerful melodies, crushing guitar riffs, and most importantly a rock solid foundation based on heavy grooves!

Eve to Adam is entrenched in thunderous groove. Now, every drummer, as they are growing and practicing, has many different paths they can pursue while developing a style that expresses who they are. During the course of my development, I found the most comfort and satisfaction in laying down a heavy beat that is iron clad and dressed up and decorated with accents and fills, like a nice coat of candy paint on an old-school muscle car. I was lucky enough early in my career to have a manager basically tell me that I hit the drums like a weakling and that his elderly grandmother could hit them harder. I credit this ridicule, as well as my love for such monster drummers as Tommy Lee, Chad Smith, Brad Wilk, Dave Grohl, and Phil Rudd, in crafting a hard-hitting style that may not be the most dazzling to look at or the fanciest, but through ten years of touring have found to be effective, entertaining, and able to connect to the audience. I’m a rock drummer for the workingman—roll up your sleeves and dive in.

The following is a brief summary of each of the drum tracks off Locked and Loaded in the order that they were recorded. 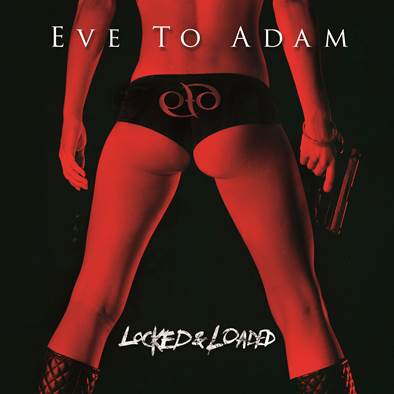 As we began the recording of Locked and Loaded with famed mega producer Elvis Baskette at studio Barbarossa in sunny Orlando, FL, I knew right away that it would be different than my previous experiences in the studio. I knew that Elvis was going to push me to my limits, and push me he did. The first song I will highlight for you is a high-energy track outlining the exploits of a party-fueled Friday night in NYC called “Bender.” The track began as a simple punk rock–inspired beat, which ended up having a jolt of double bass attack thrown into the intro and the verses, plus an interesting tribal-style tom beat in the pre-chorus.

This is one of my favorite tracks, primarily because it is a little more on the metal side. The song has a Bonham-inspired beat, a la “Immigrant Song,” that trudges like a runaway train. It creates a hypnotic pulse that flows into the main rhythmic theme of the song, which is the back-and-forth play between straight time on the verses, and half time in the chorus. With the peppering in of some double bass in the solo and ending, I certainly submit that “Fortune Teller” is a stand out track for me.

The cool thing about the making of Locked and Loaded is that some of my parts had gone through a demo phase and were relatively developed by the time we got to recording, and other songs were created in the studio, like “With the Truth.” This was a new and interesting experience because my drum parts were mapped out on a drum machine, as the track was being written and then applied to the drumkit after the song was complete. This is another example of Elvis stretching my threshold in the double bass arena. This was something I was happy to develop. The drums in this song highlight a build in the first verse (also occurring after the bridge) that has the hi-hat accenting the upbeats before building into a 16th-note disco pattern. The tag of the choruses is also noteworthy, as the beat changes to a gut-wrenching half-time groove.

The drum track of this track is a little example of how a simple groove accompanied by the right riff is a combination that has stood the test of time. The chorus beat is based on quarter-note crashes alternating from the left crash to the right crash, with a solid kick pattern and recurring snare fill that moves the chorus in a hypnotic, locked-in fashion. It is also an example of playing with a synth loop and electronic elements, which came from the mind of Eric Bass of Shinedown, who co-produced and co-wrote the track with us.

This was one of three tracks that I had the honor of recording at the amazing NRG studios in Los Angeles, California with producer Dave Bassett (Shinedown, Halestorm, Adelita’s Way). Not only was it an honor to record at a studio where some of my favorite albums had been made, but the man recording and engineering the drum sounds was legendary engineer/producer Ross Hogarth. The upbeat tempo for “Let’s Burn” dictated that the drum line had to have life and attitude. The song is well crafted rhythmically, as the offbeat intro and verses give way to an airy, spaced-out pre-chorus that’s driven by a four-on-the-floor bass drum. The balance of driving power and a spacey element really breathe life and dynamics throughout the track.

“Immortal” is the second of the Dave Bassett tracks that were recorded at NRG. The song is powerful and has an anthem quality, so the drums had to deliver a super-solid and inspired performance. The parts are not necessarily complex but lend to the core element of the song, which is powerful and airtight.

“Shut Out The World”

This song represents the final collaboration with Dave Bassett on Locked and Loaded. The focus of the drums is to provide a dynamic lift and a steady palette. Being a ballad, the drum part had to lift and carry the foundation as the song grows and culminates to a multi-layered, emotional ending.

“What Would You Kill”

This track highlights the second collaboration with Eric Bass of Shinedown. This track is an excellent example of a simple four-on-the-floor chorus beat that supports a bevy of electronic loops and sounds. The inception of the song involved an electronic dance feel accented with tom and snare fills.

As I mentioned earlier, some of the drum tracks were constructed with Elvis and me sitting in front of a MIDI keyboard controlling a drum machine. It was very interesting to map out bass drum patterns, fills, and transitions in the different parts of the song as sort of a road map, where I would then go into the live room and play the sections. It was a new experience to be able to change out drums parts in the lab, similar to a mechanic in a shop, before going in to record them. The guitar riff is an essential element of the heavy groove. This track also represents the sonic expansion of Eve to Adam through the use of loops and digital sounds. I particularly like the gunshot at the end of the track, which is a snare sample that Elvis crunched and compressed through a bunch of processors.

This track illustrates a steady build in dynamics, with a prominent quarter-note beat on the bell of the ride cymbal in the pre-chorus. The song breaks into a simple but effective open hi-hat chorus beat with crash accents on the chord changes. This is another track that entertains a half-time feel on the bridge that serves as a launching pad into one of the best guitar solos on Locked and Loaded. I like to think of this track as a melting of a classic sound with a modern element. It definitely brings out the Bon Jovi fan in all of the ETA band members.

The final track happens to be the last song that was written in the studio. It is one of my favorite songs, and not just because I enjoy the drum arrangement. I love the complex and emotional world that the music and lyrics create. The syncopated punches at the intro give way to a flowing 16th-note hi-hat pattern and super-delayed guitar riff. The bridge is one of the most powerful, defined, and musical sections that we have ever recorded as a group. This section also reappears at the end, which elicits a moment of reflection and provides a nice bookend to the final moments of Locked and Loaded.

I would like to Modern Drummer and all of you for taking the time to read this. It is truly an honor to be part of this website. See you on the road!

For more with Alex Sassaris, watch a clip below and visit www.facebook.com/evetoadam.