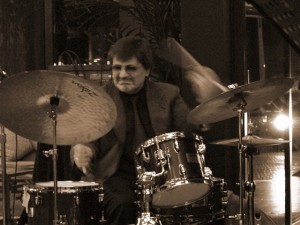 Modern Drummer columnist Mat Marucci will be appearing with his trio at Jazz Central, at 441 E. Washington Street, in Syracuse, New York, on Sunday, May 12. The concert will begin at 7 pm and will be recorded live by Cadence Jazz Records.

Marucci has numerous critically acclaimed recordings to his credit as a leader and as a sideman, including those with John Tchicai and Jimmy Smith, and he is also the author of several books on drumming for both Lewis Music and Mel Bay Publications. His recordings and books have garnered four- and five-star reviews in Jazz Times, Jazziz, Modern Drummer, and Downbeat magazines.

Additionally, Mat has written numerous articles on drumming for Modern Drummer and Downbeat magazines and for the Percussive Arts Society’s Percussive Notes and Percussion News. He has also been an adjunct faculty member at American River College (Sacramento, CA) and the Jazzschool (Berkeley, CA), and he is an endorser for Zildjian cymbals, Vic Firth drumsticks, Remo drumheads, and Puresound/HQ percussion.

For more information, or to book reservations, call Jazz Central at (315) 479-5299 or visit www.cnyjazz.org. For more on Mat Marucci, visit www.matmarucci.com.