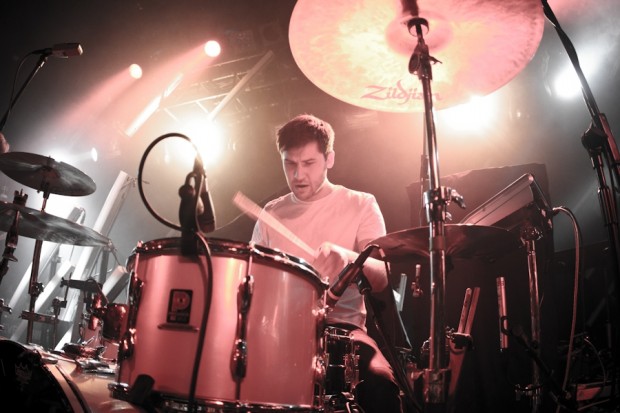 Hello, Modern Drummer readers. This is very cool for me because although I’m British, I grew up reading MD avidly. I’m in a band called Everything Everything, which is based in Manchester, England. We’ve been lucky enough to play all over the world, including the United States recently, which was such fun.

As this is my first blog post, I’d like to talk a little about my general approach to drumming and practice. I would probably describe Everything Everything as an indie band that has melody at the forefront but some strange edges. The role of the drummer is an incredibly fulfilling and fun one because rhythmically our songs are often quite interesting. Our singer, who does the lion’s share of the songwriting, plays drums too, so he relishes playing with rhythm and meter in ways that excite him. Even his vocal melodies are very rhythmically involved, which is one of the reasons I was drawn to his music many years ago.

At school, I was very fortunate to have exceptional teachers for music classes and drumset tuition, which I’m incredibly grateful for. They planted a seed, and soon I was playing in all sorts of bands and orchestras in my teens. I then went on to study music, with an emphasis on jazz, at Berklee and then Leeds College of Music. To be honest, having been taught by a lot of different, great teachers in that time, my head was spinning, and I was a little confused as to what the “correct” approach was. Once the ideas settled in my head, and I’d had some time to reflect on my time at college, I realized that there isn’t one “correct” approach— there are only opinions. The truth is that everyone needs to find his or her own way, which is what makes music such a rich and wonderful art form. I was trying to become an accomplished all-rounder, but now I’m far more at ease with the flaws in my playing. Although I work on my weaknesses, I also enjoy how they force me to creatively make work-arounds in my playing. 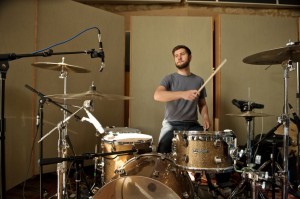 My personal approach is to focus on the basics. I think rudiments are useful tools. It doesn’t matter if you know every single one from memory, but a consistent single-stroke roll, double-stroke roll, and paradiddle are fundamental. I enjoy the flam family of rudiments in particular. I strive for quality, not quantity, with practice. It’s better to master one exercise completely than roughly blast through twenty. I don’t use the word master flippantly—it means you have it nailed. I’m still trying to master the single-stroke roll.

I was brought up on quite a few different tuition books, in particular the Gary Chaffee Patterns books, and I still like how they are methodically set out. It’s important to apply them in a musical way by improvising, as Chaffee suggests. Improvisation should constitute about fifteen-percent of practice time, I think. Practice should be structured but always enjoyable, with a mixture of exercises all played with a metronome. As well as that, I think playing along to records and making them feel great is extremely valuable. The subtleties are what make a beat really groove, so it pays to listen very carefully to the drummer on the record and get inside what makes it work.

For example, within the dynamics of the drums and cymbals, is the hi-hat played softly? Are there any ghost notes? Is the snare behind the beat? Is the kick in front? Also, how does the drum part fit with the other parts? Is the kick locked in with bass guitar? Why did the drummer play a fill at that point?

A lot of drummers get hung-up on technique, but I think that if the way you play is relaxed, controlled, and doesn’t do any physiological damage, then you have good technique. Many of my favorite drummers don’t have “perfect,” consistent technique but that helps to create their sound on the drums. The main thing is that your technique means you can play what you hear in your head on the drums.

This is just an overview of my own personal approach, but I hope you enjoyed reading it. Thanks for checking it out.

For more on Everything Everything, visit everything-everything.co.uk.