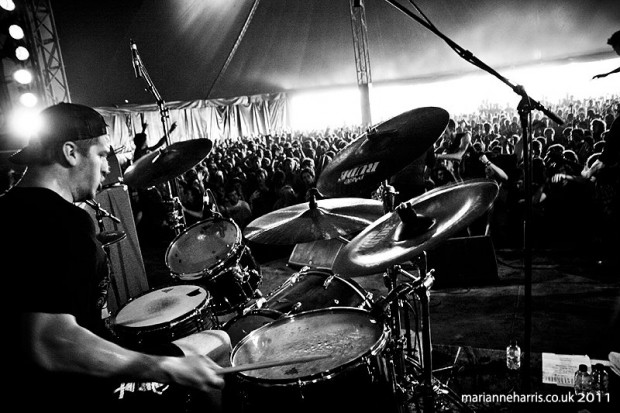 Hey, everyone! Andrew Tkaczyk (Tuh-Kah-Chick) from the Ghost Inside here. Just checking in after a long three-month tour through Europe and the U.S. Feels good to be home and relax for a while! Went to some insane places overseas including Russia, Turkey, and Greece. Never thought I’d be able to say that.

I ultimately blame my father for where I’m at currently. He made me fall in love with music at a very early age. My love for music started with Paul McCartney and anything McCartney-related (the Beatles, Wings). He later introduced me to Van Halen, which was the first “heavy” band I’d ever heard. Even though my dad was constantly blaring music, I couldn’t get enough. I wanted more and more! I then fell in love with hip-hop and rap at a pretty early age. But when I started skateboarding is when I really branched out.

From skateboarding I learned of bands like Pennywise, Bad Religion, Less Than Jake, and Deftones. By now I was already a fan of heavy music such as Sevendust and Slipknot. But I soon learned there was so much more out there. When I was about twelve years old I decided to put down the skateboard and pick up a pair of drumsticks. I originally wanted to play guitar, but playing drums at my friend Sam’s house quickly changed my mind.

It’s strange because the first time I ever sat down on a kit I played Nirvana’s “Smells Like Teen Spirit” and Rage Against the Machine’s “‘Guerilla Radio” with a friend who was playing guitar. It was almost like I had been playing drums my whole life. Somehow, for some reason, it just came natural to me. Drums and rhythm have just always made sense to me. I still vividly remember that day, the first time I ever played drums.

I believe that was the summer of 2000. I immediately begged my parents for a drumkit for Christmas. Sure enough, Santa Claus came. Christmas of 2000 I got my first set, a black CB Drums starter kit. Of course I set it up that morning and started bashing away. All I wanted to do was put my headphones on and play along to songs of my favorite bands. And that’s what I did. I never stopped playing all through high school. Eventually I started a band with my best friends called For the Fallen Dreams, who still continue to tour today.

During my senior year of high school we booked our own tour through Myspace, and a month after we graduated we embarked on that tour. And that’s what I’ve been doing with my life since. I consider myself pretty lucky, actually. I’ve seen more of the world than most people will ever see, and I’m only twenty-five. I’m extremely grateful for that. The coverage of the world continues, as I will be heading to some new places starting in May. We’re playing shows in China, Japan, Thailand, and Vietnam. Then I head back to Australia for my third time, and then over to Europe for my dozenth time for some pretty big summer festivals.

Probably the coolest part of touring I have experienced so far was the 2012 Vans Warped Tour. If you would have told twelve-year-old Andy that he was going to be a part of that tour someday, he might have wet his pants on the spot. Tons of amazing stuff coming up for the Ghost Inside camp, and I can’t wait to continue rolling the ball on probably the biggest year the band has ever had.

I hope you all have enjoyed reading this blog and continue to read other drummers’ blogs and get some inspiration. Shout out to my sponsors SJC drums, Zildjian cymbals, and Vic Firth drumsticks. Thanks to Modern Drummer for the opportunity, and I hope to do it again soon. See you on the road!

For more on Andrew Tkaczyk and the Ghost Inside, go to theghostinside.com.