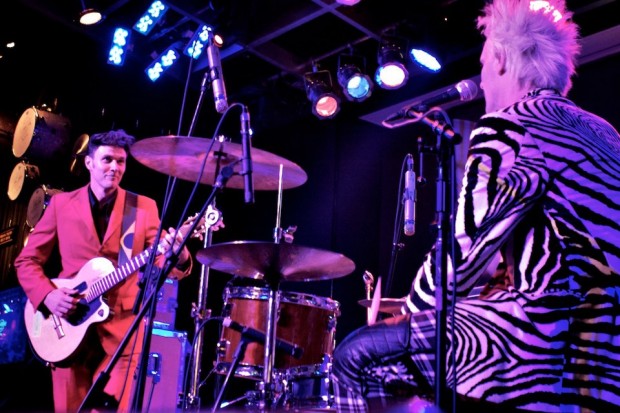 When my brother Joao and I decided to play together about five years ago, I knew that I had to reinvent myself. I started as a drummer at about thirteen years old. My favorite drummers were people like Charlie Watts, Ringo Starr, Steve Gadd, and all the crazy drummers from Brazil’s school of samba that are not too famous but just destroy it at the soccer fields while their team plays. A lot of my drumming comes from that. I was the leader of the fan club for Santos Football Club (Pele’s team) and I played in their drumming parade, sometimes on the treme terra (a big bass drum) or on the repinique, which is a drum with a very bright sound that’s kind of like a timbale. The sounds and rhythms that we use in our songs have a lot of that soccer stadium style.

I sing and play at the same time, and lots of times I just leave the drums in the middle of the song at certain poetic moments when the guitar sounds are very clear and beautiful (or even aggressive). With the bossa nova style that my brother shreds and the Santos samba soccer style that I play as the front man, we really shake the crowd! 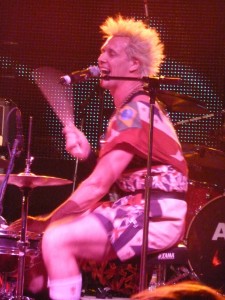 When we play live, we’re just a duo, totally stripped down. I think that’s the beauty of what we do—two brothers singing harmonies and nice melodies with crazy beats—that means something to people. We sing in English and in Portuguese, but mostly in English so we can get the point across. Since we don’t have a bass, my brother plays with his finger so he is able to make the bass sounds along with my kick drum. That’s what’s giving the ground floor to our music. And please remember, if you don’t have a good song, it doesn’t matter what style you play—it’s not going to work.

You have to be in shape to sing and play at the same time. We go from rock to funk to bossa nova, from really fast tempos to much slower ones, all according to what the song needs.

Also, my drumkit stays in the middle of the stage, facing sideways towards my brother, so people have a good view of all my moves. It’s a non-stop action show. I think body language is very important, so I bring Capoeira (Afro-Brazilian martial-arts movement) and Western-style boxing into my performance as well. I also kick soccer balls to the audience, because that really is Brazil!

You know, I like to say, imagine Sid Vicious with Tom Jobim singing “The Girl From Ipanema.” C’mon, kids!