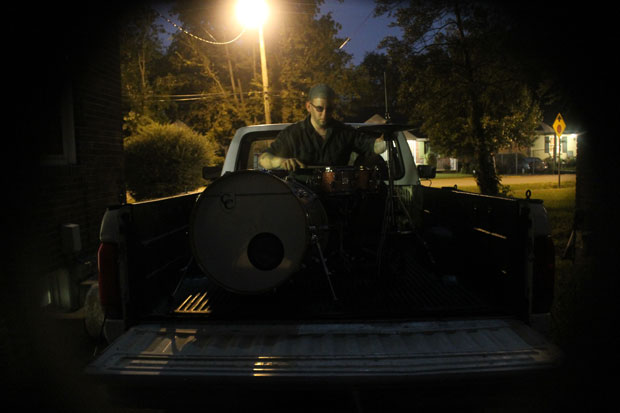 As a kid I always envisioned myself as the guitarist in a hair metal band. But from the minute I first sat behind a drumset, I knew it was my place in a band. I learned how to play from Dave Grohl, Josh Freese, Derek Grant, Bill Stevenson, and high school drum line. I moved to Detroit from Nashville in 1999 to find punk rock stardom. Ended up in a band with the bass player of one of the most influential bands of my life. Toured a while, met some great people, and moved home. People in Nashville were starting bands that sounded more like the Strokes and whatever they thought the Beatles would sound like if they were still alive and writing together.

I did some roadie work for a while and toured with an indie rock band that shared a label with the Winter Sounds at the time. Just as I was deciding to find a band of my own three or four years later, I got a call from Patrick, who didn’t know I had his number in my phone and thought I wouldn’t remember him. We’ve been on tour practically ever since.

Everyone in Nashville wants you to play like one thing or another—which is fine, but with the Winter Sounds, I don’t have to play like anyone else. We go over everyone’s parts together with a fine-tooth comb, like any band should, and the only thing we ever disagreed on was which part of the song I should play what we dubbed “the Coldplay beat.”

Recording the new record, Runner, with Scott Soulter was one of the best tracking experiences of my life. We knocked out the drums and experimental percussion stuff in the equivalent of two days, which was fast, considering we rewrote a couple songs in the process and spent hours talking about the Illuminati and 911 every day.

I left to go back to Nashville on a Greyhound and let the rest of the guys do their thing. I’m very opinionated and knew if I stayed I would never want to stop interrupting to add more weird percussion stuff. We toured to pay for the mixing and mastering without paying ourselves except to buy a box of pasta to share for dinner. (If Vic firth wasn’t way nicer to me than I probably deserve, I wouldn’t have been able to afford drumsticks.)

We slept on some amazing people’s floors (and one time in a movie theater), swam in the Chattahoochee, the ocean, several apartment complexes, and the pool in the Rock And Roll hotel in Charlotte. We witnessed Occupy Wall Street in full swing and played in Athens the day R.E.M. broke up. We became street performing gypsy tramps who just so happened to play some kind of dance rock new wave music whenever we could find an outlet to plug into. I took a medical leave of absence while the band went to the West Coast, and now with the album on its way in November, we’re all expecting a whole new ballgame from here on out. I don’t expect Lady Gaga is going to be opening for us in six months, but this record is going to mean something to people, and knowing that you have so much of yourself in something that brings someone else joy feels better than curling up on a warm garage floor after a house party.

I play Vic Firth 2B wood-tips and get limber with the MS6 Chop Out practice sticks. I sit on a Roc-n-Soc throne and use Tama pedals and stands all the way around. I tracked the record on an assortment of C and C, SJC, Pearl, Gretsch, and homemade drums. I tour with whatever feels right on the day we pack up.

For more on Joseph Reilly and the Winter Sounds, go to thewintersounds.com.