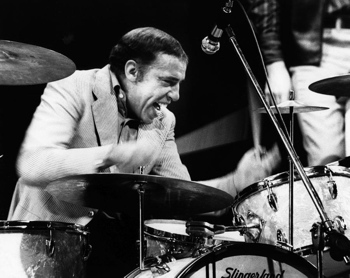 Buddy Rich was the first jazz drummer I saw perform live as a kid, and experiencing his intensity in a club at such a young age left a deep impression on me. It’s an understatement to say that he was one of kind. His sound was always supportive, but it also cut through each section of his band like a razor blade. He used big drums—which had a major influence on his sound and projection. His setup included a 14×24 bass drum (with a moleskin patch and a wooden beater), a 9×13 rack tom, two 16×16 floor toms, and a 5×14 snare drum. His Avedis Zildjian cymbals, which included a 20″ ride, two 18″ crashes, a pair of 14″ hi-hats, and a 6″ splash, shimmered when he struck them. He preferred wood-tip sticks—slightly heavier than a pair of 7As—and the sensitivity of Remo Coated Diplomat drumheads helped complement his exceptionally wide dynamic range.

Most drummers are in awe of Buddy’s technical command in playing drum solos. But if you dig a little deeper into his style and listen to the way he interprets section and ensemble figures, you’ll also hear a supreme, articulate accompanist. Buddy’s time feel was right down the middle of the beat. The late Jim Chapin once told me that, in his opinion, Buddy had the most accurate time, from beat to beat, of any drummer he ever heard.

For a taste of Rich’s intensity, check out “Come Back to Me” from the Sammy Davis Jr. recording The Sounds of ’66. For an example of Buddy’s hi-hat phrasing and articulation, listen to “Chelsea Bridge” from his own solo album Mercy, Mercy. For a sample of his early soloing, pick up the 1940 Tommy Dorsey recording That Sentimental Gentleman and listen to the tom and snare drum solos on “Quiet Please.”

This transcription comes from the beginning of Buddy’s legendary solo on “West Side Story Medley,” which appears on the album Swingin’ New Big Band, Live at the Chez.