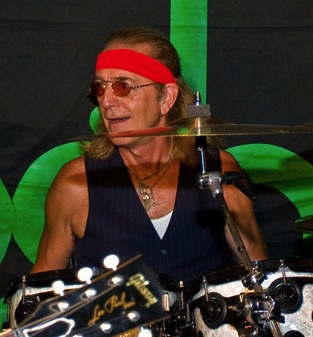 Foghat’s contribution to classic rock will forever be great, as they penned such classic party anthems as “Slow Ride” and “Fool for the City,” both of which remain rock radio standards to this day. But the group was never shy about their blues roots, and on Sunday, August 19th at Kenny’s Castaways in New York City, Foghat drummer Roger Earl will be inducted into the Blues Hall of Fame.

Alongside Earl (who has kept Foghat going for over 40 years, while the other members either exited, took multi year breaks or sadly passed on), many other blues contributors will be inducted, including Joe Louis Walker, Steve Holley, and the Uptown Horns, among others. The event will be hosted by the Michael Packer Blues Band, and tickets are priced at $10 each. The ceremony begins at 3pm, and Kenny’s Castaways is located at 157 Bleecker Street, New York City, NY, (tel: 917-475-1323). This legendary club will be closing its doors for good after 45 years in September.

In addition to containing unmistakable blues elements in their songs (and scoring a hit with a cover of Willie Dixon’s “I Just Want to Make Love to You”), Foghat went one step further back in 1977, when they assembled a “Foghat Blues Tribute Concert” at New York’s Palladium, which included performances by such blues legends as Muddy Waters, John Lee Hooker, Paul Butterfield, Johnny Winter, Honeyboy Edwards, Pinetop Perkins, Eddie “Bluesman”  Kirkland, and Willie Big Eyes Smith among others.

And Foghat (who in addition to Earl, is comprised of singer/guitarist Charlie Huhn, guitarist Bryan Bassett, and bassist Craig MacGregor) remain true to the blues, as their last studio effort, 2010’s Last Train Home, paid tribute to the genre, with such covers as Elmore James’ “Shake Your Money Maker” and “It Hurts Me Too,” Muddy Waters’ “Louisiana Blues,” and original tunes that replicated vintage blues rock sounds (“Born for the Road,” “Last Train Home,” “495 Boogie”). The album also featured Rogers’s long time friend, Eddie ‘Bluesman’ Kirkland, in one of his last recording appearances before his 2011 death.