Hello, MD readers! It’s never comfortable writing about yourself, so bare with me while I take you through this. For starters, my name is Steve Patrick, and I just recently turned twenty-three, which brings me to the realization that I’ve been drumming for more than half of my life. With the start of another year, I have a lot to look forward to.

My band, Glory Days, released our new album, Broke in New York, on April 3. Writing and recording it was a really interesting and new experience for me. As a group, we feel we finally found the type of sound that is the most true to us. We experimented with different sounds and always sort of came back to a certain style of music, and that’s what Broke in New York is all about. We wrote the album in one room in New Jersey and really worked out songs as a group, as opposed to writing songs in a studio or having one guy write an entire song. As a drummer, it was an awesome experience and really helped me feel the songs as opposed to just playing them. Any drummer can tell you, if you can feel the songs, they are so much easier to play and easier to get creative with, which was huge for me.

Recording this album was different from any other recording experience I’ve had as well. Nowadays everything is about tracking and tweaking and making non-perfect takes perfect with a computer, but Broke in New York was different. We wrote the songs with the live performance aspect in mind and wanted to keep it as organic as possible. We decided the best way to keep that energy would be to record the songs together in a live room. We did just that at the Converse Rubber Tracks Studio in Brooklyn, New York.

For a drummer, recording live is amazing. You can feel the songs and feed off of the other guys’ playing. A computer can allow you to touch up a performance all you want, but it lacks the soul of a live take. I feel it shows on the album, as it grooves and breathes more organically than anything we’ve released in the past, specifically my drumming. With that said, playing it live feels fantastic, so of course I’m counting the days until we can get back out there and tour to support the release! So to all you drummers out there looking to keep it interesting and learn a little about your drumming, get more involved with writing, record it live, and keep it rock ’n’ roll!

For more on Steve Patrick and Glory Days, go to glorydaystheband.com , facebook.com, or youtube.com.

Andrew Weber of Green or Blue 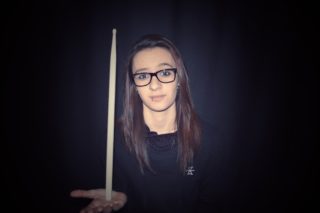 On The Beat with Kristina Schiano: Talks Determination