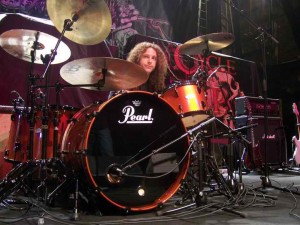 Hello, brothers and sisters. It’s been a while since I’ve written a blog for MD Online. Last time, I was playing in four different bands and ran a recording studio. Well, I’m glad to say the same is still true. In the interim I recorded a new record with the Atomic Bitchwax, The Local Fuzz, which consisted of one forty-two-minute song with fifty riffs that didn’t repeat once and no vocals. It was some undertaking. I don’t know how I remembered all that live, but it worked out better than I thought it would. We also did a five-week run in Europe called the Up In Smoke 2 tour. Lots of fun, as you can imagine.

I also did a lot of touring last year with Monster Magnet. We did the Soundwave festival in Australia with Iron Maiden and Slayer, just to name a couple of the bands—that was awesome. Then it was back to Europe with MM to do the summer festivals, which are always a blast. When I came back home to Jersey (don’t say it) I recorded the second Riotgod album, Invisible Empire, on Metalville records. It’s available now in Europe and the UK and will be out in the U.S. this January 31. Riotgod includes a couple of the guys from Monster Magnet.

At this point it’s a new year and there is a lot to look forward to. I just got a new Pearl endorsement, which I really love—thanks, guys! I’ve been using Meinl cymbals, Vater sticks, and Aquarian drumheads for quite a few years now.

Riotgod will be touring the new album in the U.S. in the beginning of February and then going to the U.K. and Europe until about the middle of March. Then I finish recording a new record with Atomic Bitchwax, do a Euro run with those guys, and then go back into the studio with Magnet to do a new record. Then…back to Europe with MM, probably in early summer, and then home for a minute and back to Europe with Riotgod in early August to do the Wacken festival and a few others. In between all of this I run a little studio, where I pretty much live in at this point. (Keeps me out of trouble.) This is where most of the bands I’m in do their recording. I also record other acts there, if there is time and I get sick of hearing my own music.

Well, that’s where things are at this point. Hopefully I can stay this busy for a long time—I love it!