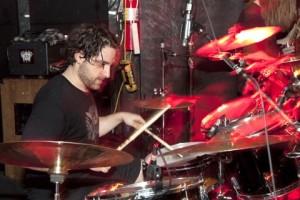 My name is Lev Weinstein. Growing up, I was an avid reader of Modern Drummer, and it was a feature on Morbid Angel’s Pete Sandoval that pushed me from thrash (which I’d been devouring since I stole my brother’s copy of …And Justice For All when I was eight) into the more extreme forms of metal. The sound of the stuff was at first fairly impenetrable, but that stick was counterbalanced by the carrot—drumming like nothing I’d ever heard before. The power, speed, and endurance on display in these far-flung genres was revelatory, and set me on the course of playing the music I do today.

Bloody Panda has started getting together to demo material for a new album, with exciting results so far. In the meantime, a remix album of our last record, Summon, came out November 15. Titled Summon: Invocation, this features some killer players (such as my own Krallice-mate Mick Barr) doing their own very cool stuff with Yoshiko Ohara’s momentously unsettling vocals and the backing instrumentation, so be sure to check it out.

I’ve also spent the last bunch of years freelancing around NYC, as well as teaching privately and at various schools and programs. I’ve worn a costume and played songs about how “sharing is good.” I’ve taught with sticks on tables and floors in the projects. I’ve played pop gigs to tens of thousands. And I’ve played metal to tens. My tour accommodations have ranged from artsy Parisian hotels to the back seat of a van in late-November New England—and that was just in the span of a couple days.

I think it’s fair to say that through these sorts of experiences I’ve formed a few opinions and impressions that might be worth sharing.

Point 1: To make any sort of constant income from playing music, you have to be willing to grind, and to play lots of gigs and lots of different styles. There’s always a possibility that your band will explode, but it’s not really a realistic career choice, anymore than a plan to win the lottery would be.

Think of the approach as trying to contradict the phrase “jack of all trades, master of none.” You want to make the damnedest effort you can to be a master of all trades. You won’t succeed—even if you succeed on a technical level, you almost certainly won’t have a mastery of the feel required to play each and every genre with absolute authenticity—but regardless, the more styles you have tucked away in the utility belt, the better.

Point 3: Being a versatile player does wonders for your playing in any genre. My approach has been to find as universal a technique as possible for navigating between all the different styles and feels one could play.

Here are some examples of what I mean by universal technique: When I’m working with students interested in developing metal chops, two things come up every time: how to play fast double bass, and how to play blast beats. My approach to playing a fast blast on the snare is not fundamentally different from the approach I take to playing a single-stroke roll around the kit at that tempo. The way my hands move when I’m playing a single-stroke roll is not really fundamentally different from the way my hand moves when playing a constant 8th-note pattern, or a solid rock backbeat for that matter. Because any change, be it tempo or feel-related, is a modification, not a reinvention, practicing one becomes analogous with practicing all.

Likewise, there are natural changes to the proportion of ankle, leg, etc., in a stroke of a bass drum as tempo increases. But these are alterations your body learns to transition through naturally with practice, and it’s best to allow the way you play to evolve and speed up organically from a base of good fundamental technique. Start from a point of having your heel slightly up, find the sweet spot on the footboard, and as much as possible, let the pedal do the work. Practice with a metronome, and methodically increase the tempo. Speed will come.

Thanks to MD for this opportunity, and thanks to you for reading!

Lev can be contacted for private lessons at lev.weinstein@gmail.com. To download Bloody Panda’s Summon: Invocation for free, go to www.bloodypanda.com. And for more on Krallice, go to www.myspace.com/krallice.