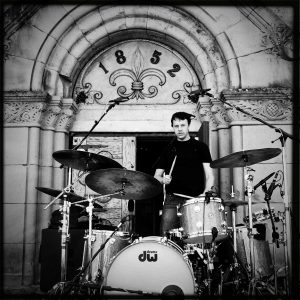 Hello, drummers worldwide, my name is Blair Sinta. I’m a drummer living in Los Angeles, where I’ve been for the past fifteen years, and I do a fair amount of recording and touring out in the world. But today I’m here to inform you of some recording I did with Mikey Wax for his recent recording, Constant Motion. We recorded with producer Warren Huart at the helm at Swinghouse Studios here in L.A., along with David Levita on guitar, Jon Button on bass, and Zac Rae on keys. Eleven songs were recorded over three days, which is a fairly relaxed pace for recording these days.

All the rhythm section tracks were recorded live, going for the best take possible. Mikey was playing guitar and singing with us at the same time, which is very nice in this modern day of recording. Listening back to the record now as I write this, I feel energy from the live tracking that didn’t have to be manufactured through mixing or adding a ton of extra “stuff.”

Arrangements and parts always come together easily when the songs are written well. The track “Fighting For” is one that stands out to me. Mikey’s melodic sense and straight-ahead lyrics are being supported and delivered in a beautiful/forceful/dynamic fashion. “Keep Dreaming” pays tribute to Motown, an era that is always fun to draw from and expand on. “Marion” is a great big ballad with a classic Ringo swing to it.

I recorded with a mix of DW, ’70s-era Gretsch, and blue Ludwig Vistalite drums (very underrated!). A variety of Black Beauty, Supraphonic, and Radio King snares were my go-to’s. The whole record was approached to support Mikey’s songs and not necessarily to show off chops. When I’m called to record pop music, I’m always trying to deliver energy and great feel—and hopefully some interesting parts—throughout the process. If you’re a fan of melodic pop music, this is a great record to check out.