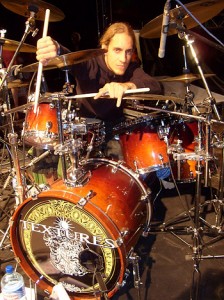 It’s 2003. Me and my band Textures are performing our first shows in Holland. Alongside Dillinger Escape Plan and Meshuggah, the press calls us “a new phenomenon,” math metal. Writing some riffs with random digits on a whiteboard, we experimented a lot with weird polyrhythms and time signatures. It would become a cornerstone of the booming genre to come.

That time it was big fun on stage playing these weird double bass patterns underneath a straight backbeat. Looking into the audience, you could always see a big question mark rising above the heads of the listeners. In fact, you could literally see people struggling to comprehend our music. One guy banged his head to a pulse but then suddenly saw his neighbor freaking out on a totally different pulse, and his other neighbor to another one. Are we all listening to the same song here?It was hilarious to see this Carnival of Headbanging People, all claiming to know the right pulse. Or all pretending to know what was going on.

Fast-forward to 2011. We’re on the road with Periphery. Drummer Matt Halpern and his guys invited us to come over to the States to join them on a six-week American tour. Our music progressed a lot, but the freaky rhythms are still an important tool. Since last summer the term djent is the next big thing. A new name for an already known (but still considered state-of-the-art) music form.

We play the Key Club in Hollywood. The new Textures song “Singularity” starts off with an explosion of odd rhythms. Quintuplets changing into 16th notes, with a bizarre poly thing running in between. A strange but cool way to start a song, we think. The weirdest thing is that the audience seems to think the same way. After we count it off, the whole venue’s shaking their heads to the first quintuplet of every beat. And after we switch to 16th notes, you see them hesitating for a split second, but then again the heads are collectively banged to the right pulse. During Periphery’s set…the same. The groove is all over the venue. Totally!Suddenly I realize that we new-school metal drummers came a long way from an audience that didn’t understand a thing about our rhythms to a venue that is collectively absorbing what we play. Isn’t that freaking awesome!Since the beginning of this genre, we struggled to give music a new impulse. We tried to show the audience that difficult rhythms can be groovy as hell. In fact, having a constant pulse on the hi-hat and emphasizing all that’s in between the pulse (syncopation) with the double bass might be a formula for the strongest groove/feel on the planet. That’s quite a paradox, isn’t it?

Emphasizing notes between the beat makes the actual feeling of pulse stronger. We math-prog-djent drummers deserve a well-earned “chapeau” for kicking these people in the nuts who said that metal has nothing to do with groove.